War of the Spark Mythic Edition release: What happened?

War of the Spark Mythic Edition release: What happened? 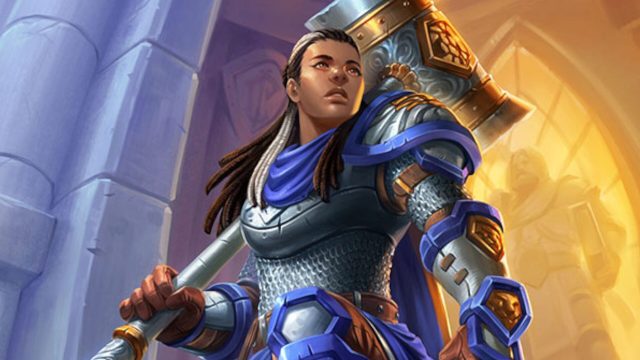 In the last year, Wizards of the Coast has significantly overhauled their Magic: The Gathering product line. From the announced Masters set hiatus to an increased focus on Magic as an eSport, as well as the first ever straight-to-Modern set, the last six months have been quite the ride for Magic fans. One of the most controversial additions to the product line is the Mythic Edition sets.

Mythic Edition sets are a brand new Magic product, designed by Wizards of the Coast following the success of the Masterpiece Series. Each set includes a normal box of the set it releases with, but eight of the packs come specially marked. Inside each one is a full art, borderless, foil planeswalker card. The most expensive card from this series so far is Teferi, Hero of Dominaria. The Mythic Edition of Teferi currently sells for an average of $225.

Guilds of Ravnica Mythic Edition was the first in this experimental series. It was revealed to be available in very limited supply on the Hasbro Toy Shop website for only a few hours on October 3, 2018, and on Grand Prix prize walls in even scarcer quantities. Unfortunately, fans did not receive the reveal well.

In reaction to the announcement of GRN Mythic Edition, fans took to social media and expressed their concerns. Players felt that the price ($250) was exorbitant, that the foiling process was after the style of the unpopular From The Vault sets, and that, overall, this felt like a cash grab. Regardless, on the day of release, the product sold out within minutes of posting, though not without incident. Many buyers reported receiving a cancellation email, and they found the product was out of stock when going to repurchase.

Wizards of the Coast set out to make this right. In what could be considered one of the classiest public relations outreaches of 2018, they sent out apology letters to each of the affected customers. Each one contained a special Ultimate Masters ‘Box Topper’ pack, holding a valuable special edition of a card from a set that had not even been spoiled yet. Fans quickly uploaded pictures to various media outlets, spawning the beginning of Ultimate Masters spoiler season. It would seem that fans forgave Wizards of the Coast and all but forgot how they’d handled the first Mythic Edition set.

Fast forward to this past Thursday, May 1. It’s 2:59 PM EST, and thousands eagerly await the release of War of the Spark Mythic Edition. It’s widely known that there will only be 12,000 copies available this time, so many have taken the afternoon off to ensure they can be first in line to secure their unit. Excited fans are refreshing the Hasbro Toy Shop eBay page, awaiting the 3:00 PM listing.

Over the next 10 minutes, four things happen:

Confused and upset fans took to the Wizards of the Coast Twitter account to relay their frustrations. Would those first in line be made right, despite the cancellations and payment errors? How did they make over 42,000 sales on a product limited – supposedly – to 12,000 units? Why was there a second listing after the first one sold out? How could this happen again? Wasn’t the switch to eBay from the Hasbro website supposed to prevent this sort of thing from happening?

The responses so far

Wizards of the Coast responded to the issues later that day via their Twitter:

We are currently investigating issues with War of the Spark Mythic Edition orders and we'll have updates as soon as they're available.

They followed this up hours later with a full statement:

Due to overwhelming response we sold out of the War of the Spark Mythic Edition orders earlier today. We’ve partnered with @eBay to ensure affected customers are contacted. https://t.co/Kx2gg4XMzO

Many fans expressed their disappointment, emphasizing that this sort of mistake should not happen repeatedly.

eBay began contacting customers via email on Friday, letting them know whether their order was confirmed or if they were among the vast majority of affected fans who had their orders canceled. However, the cancellation emails included a hopeful-sounding promise of reparations:

…First, eBay will be sending you a virtual gift card towards a future purchase in a separate email. Keep your eyes open for that. Secondly, we’re working with Wizards of the Coast to send something special to every person whose order was canceled. You’ll hear more about that delivery in a future email from us.

If you were among those affected, you’re likely a bit unhappy with the way this all panned out. However, hang in there. The timing of this Mythic Edition release puts us close to the spoiler season of Modern Horizons, which is reminiscent of the Guilds of Ravnica Mythic Edition release of last year. If Ultimate Masters box toppers were the olive branch then, will something from Modern Horizons be the peace offering now?

Alternatively, we could all get an eBay card for 5$ off our next Mythic Edition purchases, with a code for MTG Arena card styles. But the timing looks hopeful. That’s especially true since consumer expectations will likely place pressure on Wizards of the Coast to meet or exceed the reparations made for the Guilds of Ravnica release.