One of these two teams is going to Istanbul 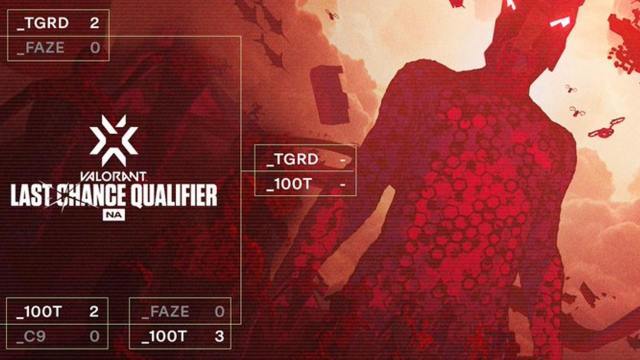 Provided by Riot Games. The most recent end of the VCT 2022 NA LCQ bracket.

The grand finals for the VALORANT Champions Tour 2022 North America Last Chance Qualifiers are set, with The Guard facing off against 100 Thieves. Whoever wins will get the final NA spot at Champions, representing their region alongside OpTic Gaming and XSET. Just like the previous match in the tournament, this is a best-of-five series, but this time to determine who wins the LCQ.

#VALORANTLCQ has 1 day left.
Tune in tomorrow to find out who will go to Champions!

The Guard’s path to the final

From their first match to their last, The Guard have dealt with strong opponents on their upper bracket run. Starting with Sentinels, the game was chaotic but a 2-1 win nonetheless. Sentinels’ new signings led that match to be the most viewed one of the tournament so far. The team itself didn’t view that win positively, with in-game leader Jacob “valyn” Batio mentioning that after securing their spot in the Grand Finals. The team looked at that win as a poor performance they needed to improve on, and they did just that in their next series against Cloud9. In a clean 2-0 sweep, The Guard used every tool in their roster to beat an opponent they knew well from Stage 1 Challengers.

Then, last but not least, they faced one of the top-ranked teams in the LCQ in FaZe Clan. Heading into this series, FaZe managed a perfect half to secure a 2-1 win against 100 Thieves. On The Guard’s side, their win against Cloud9 gave them a much longer break heading into this matchup to prepare. Those preparations came to light, as they stomped over FaZe Clan 2-0. It was by far their best performance of the tournament, with 13-5 and 13-7 as the map scores.

The team clearly was getting better as the tournament went on, something NA fans recognized from their Stage 1 Challengers title run. Yet, unlike that run, it wasn’t all on one or two players popping off. The Guard look strong if not stronger than their Stage 1 form, and they have the advantage from coming through the upper bracket. With two map bans on their side, they might be able to finish their run by making it to their second LAN of 2022.

100 Thieves’ path to the final

Where The Guard had their stumble in their first series, 100 Thieves’ run to the Grand Finals focuses on one match in particular. After a close win over NRG, they were on Ascent, map three against FaZe Clan in the upper bracket. After hitting the half up 9-3, they failed to win a single round in the second half to lose the map and series. It was a mix of the team underperforming and FaZe stepping up, sending them to the lower bracket.

Yet, they took that loss on the chin, improving to beat Sentinels 2-1 and sweeping Cloud9 2-0 to keep them alive. So, when The Guard swept FaZe, it would lead to the only rematch of the tournament. This time around, in the first best-of-five of the tournament, the lower bracket final wasn’t close. FaZe kept the first map of Icebox close but tired out as the series went on. When the map three of Ascent led to 100 Thieves hitting the half up 9-3, they swept the leg. This time, they had the perfect half to eliminate FaZe and make it to the Grand Finals of the NA LCQ.

In a similar fashion to The Guard, 100 Thieves are extremely flexible, arguably with a deeper map and agent pool than the Guard. Plus, with the clutch factor of Derrek “Derrek” Ha so far this tournament, anything can happen. They won’t have the advantage pre-game, but they have the chance to redeem themselves after a poor start in 2022 and reach Champions.