"It’s my first time at an event, and it is everything I expected it to be." 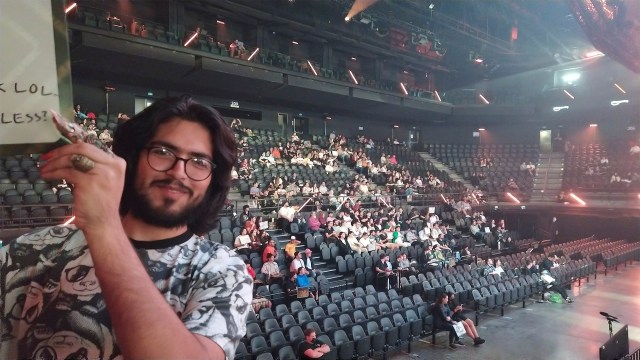 by Aykut Sapaz
[addtoany]
On the Ground

For Day 3 of VALORANT Championship Tour: Champions (with in-person fans), the venue was packed, despite the inevitable heartbreak of losing an EMEA team. Lower bracket took its first victims, as fan favorites Team Liquid and Fnatic faced each other after FunPlus Phoenix versus Leviatán.

That sad fact did not stop the in-person audience from cheering for their team, however they could; from signs of a thousand words or screams from the bottom of their lungs, they made sure the experience in Volkswagen Arena was memorable for everyone in the venue that day, from the fans and players to members of press and producers.

The best and worst of the venue

“Today was especially good because of the Fnatic-Liquid match, since they have a high number of supporters. The cheering creates a breathtaking atmosphere.”

Before talking about their reactions to matches, it’s worth talking about the atmosphere at the arena for both new and veteran fans alike. Many people we spoke with said something along the lines of “It’s my first time in an event, and it is everything I expected it to be.”

But however good it was, both the venue and the event had some mistakes that can be easily fixed or amended by constructive feedback, such as adding the ability to leave the venue and re-enter, or adding an area with some dedicated computers for fans to play VALORANT on like the ones at VCT Masters 2 Copenhagen.

“At the lower floor entries, the screens were not placed well and we couldn’t see the players well.” and “People should have cheered for the opposing team as well, especially at walkouts.” were some of the other complaints about the organization of Champions we heard from the fans we spoke with.

“I expected it to end [2-1 for Fnatic] but the second match was rougher than I expected. I assumed it would be harder.”

Many comments about these matches focused on the latter series of the day, as it was what the fans were most excited about. As to who would win, diverse answers were given – some expected Fnatic to 2-0 straight away, some thought they would be challenged harder, some even thought that Liquid would make a comeback after the loss of the first map.

The most common answers were similar to “Yes, I expected it to go 2-0; I knew Fnatic would easily win” or “I didn’t expect [this result]. I hoped Team Liquid would come back 2-1 but Fnatic played well.”

“Yes, I think everyone expected it. Liquid is inconsistent there — could have been a surprise — but it didn’t happen.”

We asked the audience for Champions about the player who excited them the most when they were on stage.  Shockingly, we had diverse answers to this question but the overwhelming majority still replied with Turkish superstar Emir Ali “Alfajer” Beder. Other notable candidates were Ardis “ardiis” Svarenieks, Jaccob “yay” Whiteaker, Jake “Boaster” Howlett and Adil “ScreaM” Benrlitom.

In Team Liquid’s series against OpTic Gaming, the majority of the crowd were cheering for them, especially for ScreaM and Jamppi. This was unsurprising due to the popularity of these players in Turkey and the tournament being played on EMEA ground. However, in their next series against Fnatic, Team Liquid received lesser praise compared to the other EMEA team. Liquid’s Nabil “Nivera” Benrlitom commented on how this affected them at the press conference:

“I think, not really, because we still had a lot of people in the crowd that were cheering for us and they were right behind us, we could see them. It’s really, really amazing and a good experience [to play with fans], I think it’s [the] first time for me and Jamppi; and experiencing [it] when people are with you and against you, it’s really nice to feel it.”

Many fans were also excited about potential other events in Turkey after Champions. When we asked where events could be held besides Istanbul, the two most common answers were “Izmir could be nice,” and “Ankara, since it is big like Istanbul.” For most of them, the location did not matter as long as it was in home soil.

Entering Day 4, we will see reactions to OpTic versus XSET, DRX versus LOUD and predictions about the inevitable OpTic versus LOUD matchup which happened 4 times already, all ending with OpTic victories. Stay tuned.

Aykut Sapaz
The beauty of esports lies in its power to replace your world and its worries, anger or fears, even for the shortest of moments. I want to make this power available to all who reach for it.