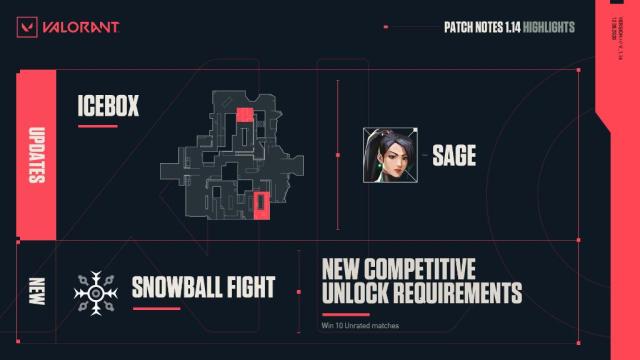 It’s finally patch day for Valorant, and we’re getting changes to Sage and Icebox along with a brand new game mode, Snowball Fight. Patch 1.14 will be available for players worldwide today.

Here is everything you need to know about the new patch and the new Snowball Fight game mode.

The two major changes in Patch 1.14 are for Sage and Icebox.

Sage: She can no longer place her Barrier Orb before the buy phase ends (this actually got changed with the Killjoy hotfix). Her Barrier will no longer lose health over time but instead will begin to deteriorate seconds before expiring.

Icebox: The controversial map is getting some significant changes to elevations, mainly on the A site, that should help make it easier to hold angles.

There’s a new game mode coming to Valorant with this update featuring snowballs! The Snowball Fight mode is a five vs five deathmatch where players will get to choose their weapons to fire snowballs from. The snowballs will have a specific travel time and arc, but players will have infinite ammo.

Gifts will spawn around the map that give players upgrades. Here are the following upgrades players can get:

If you kill an enemy with a powerup, they will drop the powerup on the ground and you can pick it up.

The Night Market is an update to every player’s shop that will display items on sale. Starting on December 10, each player will get six chances to receive a random Select, Deluxe, or Premium weapon skin at a discount. This will undoubtedly give players interested in buying skins better options.

Be sure to log in and check out the new Snowball Fight mode along with the rest of Patch 1.14 when it goes live!