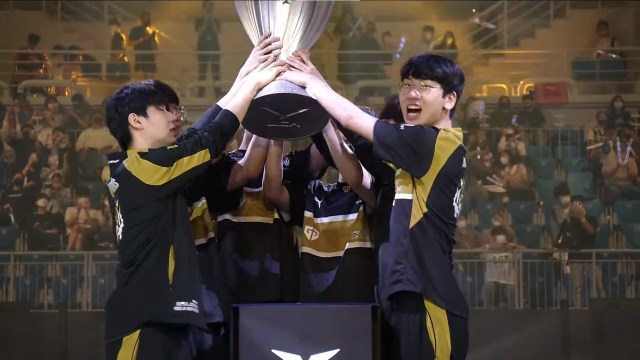 Screenshot via LCK Gen.G are the favorites to win it all heading into Worlds 2022

The 2022 League of Legends world championship is finally here. The 24 best teams from around the world will be fighting against each other over the course of the next few weeks to determine who truly is the Worlds 2022 champion. But before everything kicks off, Upcomer’s panel of League experts have gathered to give everyone their top 10 teams heading into the tournament.

Very few people predicted that DRX would make it over LiiV Sandbox during the LCK regional qualifier. When the stakes were at their highest, the veterans of DRX did not crack under pressure. The former World Champions Deft and Beryl are a formidable bot lane with their mid laner Zeka constantly setting his bot laner up during teamfights with his excellent mechanics.

DRX must undergo Play-Ins to qualify for the Group Stages where the rest of the LCK teams are. The top side of the team, especially Pyosik, has not been playing too well. DRX would have to shore up their early game blunders that funnel them in unwinnable deficits to make it far into this tournament.

Which Rogue players would you pick for your dream team? 👇 pic.twitter.com/chQAzIHBsY

Rogue might come in as the LEC Champions but most would consider their victory in the finals against G2 Esports an upset. In fact, they did lose their previous series against them. Regardless, Rogue has put an end to stories of them choking in playoffs.

For changes that were very criticized last year, Rogue managed to prove most people wrong. All five players from the team deserve credit and have been performing very well. Their top laner Andrei “Odoamne” Pascu is among the best in the West and will try to show his strength again on the international stage. Can he reach his peak of semi-finals again? It will be hard, but for the first time ever Rogue don’t find themselves in the group of death.

The first #LCK team to make Worlds 4 consecutive years, and the last two they made it to Finals? 👀
Check out international stars @DWGKIA's key points in this mini-guide before #Worlds2022! pic.twitter.com/Cm9kzw8sBu

The performance of Damwon Kia relies heavily on whether or not the team has successfully integrated Nuguri back into the team. The current champion pool in the top lane, minus Maokai, is a perfect playground for the superstar top laner. With Deokdam lacking the firepower you would find in Ruler or Viper, Nuguri would have to be a formidable carry for Damwon.

Deokdam should find more comfort in the new set of bot laners that are available aside from Zeri and Sivir such as Kai’Sa and Miss Fortune. While their performance in the semifinals against T1 was rather lackluster, Damwon Kia is not a team to easily dismiss given how ShowMaker and Canyon have always delivered at Worlds.

If T1’s performance was based on the Spring Split, they would be a lot higher on this list. One of the strongest teams in the LCK this year, they looked like their armor had been chinked with their loss to Gen.G in the LCK Summer Split finals.

Lee “Faker” Sang-hyeok is still the center of the team and one of the best mid-players in the world. Most of us at Upcomer believe Choi “Zeus” Woo-je is the best top laner in the world and has consistently dominated every opponent in the LCK even while his team is behind. T1 is still one of the most talented teams in the world. While it feels like there are many teams above them due to their recent performance, do not be surprised if they out do this ranking.

Time to take over NA

G2 Esports had a fantastic season at the Mid-Season Invitational. Despite disappointing in the later stages of the tournament they did show that they have to be feared in the international stages. Despite a loss in the LEC finals, G2 finished the spring regular season in first place. What started as a roster with rookies now looks like the best team from Europe coming into the tournament.

At this point, Rasmus “caPs” Borregaard Winther and Marcin “Jankos” Jankowski are among the most experienced players at this tournament. Their leadership will be key but the other players of the roster have proven to be very versatile. Worlds is also about who gets the best read on the meta and while it’s impossible to predict that for now, G2 have played a wide variety of champions in the LEC. The organization was missing from the tournament but will be looking to fight past the group stages like during their former glory.

The reigning back-to-back Mid-Season Invitational champions had a weird summer split in the League Pro League. Despite having a better record than their spring campaign with a brand new top laner finished lower in the standings and after a shocking playoff loss to Edward Gaming, were forced to earn their spot at Worlds 2022 through the LPL regional finals where they lost to EDG again before beating LNG Esports for the final spot.

People are quick to write off the LPL fourth seed but don’t get it twisted, the team only lost three games in the regular season and only lost the reigning world champions in post-season play. The team is stacked from top to bottom and when they are on their a-game, there isn’t a team in the world they cant beat. The team definitely has championship aspirations and expect them to go far at Worlds 2022.

JD Gaming is undoubtedly a formidable team going into Worlds 2022. The team’s success in this split was mainly due to their spectacular early game driven by their laners’ excellent laning phase supported with Kanavi’s dominant jungle pathing that choked the enemy jungler out of the game.

The reason why JD Gaming is rated lower than the opponents that they have beaten in the playoffs is due to their extreme reliance on the early-game to carry their lackluster mid-game. While Top Esports and Edward Gaming possess distinct mid-game strategies, JD Gaming, especially 369, has shown tendencies of overextending in side lanes or funneling into bad skirmishes.

JD Gaming’s teamfighting prowess especially when Yagao is on form is terrifying. However, the team showed too many vulnerabilities to be rated above more consistent LPL teams.

Finally we have arrived in New York City! Thank every little knights who came to the airport to support us and please be safe btw! See you in the arena!#EDGWIN pic.twitter.com/KVoYh0RpkC

The LPL third seed being higher than the LPL one seed does come as a shock but there are reasons behind it. Although JDG has some killers on their team and are seeing career-defining splits from their mid and bot lanes, none of those players have shown up on international stages before. While the likelihood that we see another FunPlus Phoenix scenario is unlikely when it comes to figuring out which teams have the best chance at winning Worlds, it’s hard to bet against the reigning champs.

Edward Gaming have been here before with the same exact roster and although the team has not played at their peak for a majority of the year, their playoff resurgence shows that they are still capable of playing at a world champion level. Lee “Scout” Ye-chan and Park “Viper” Do-hyeonare playing well as of late and the rest of their team is starting to turn the corner. Until proven otherwise, it’s not wise to count EDG out on the international stage.

Top Esports being here might generate some controversy, considering they are very well known for their volatility of play as well as player performance and form. While not returning as a first seed like in 2020, them and JDG continued their trend of going to Game 5 when facing one another, and thus here we are again. Whether they will rise or fall in Worlds 2022 is irrelevant when you look at how TES tore through the LPL in summer, it would be a disservice to not put them in our top 5.

A 13 series winstreak in the regular season along with strong performances in playoffs showed that only JDG could really match them in summer, and even then it went to a full five games both series. And mind you, star mid laner Knight didn’t even have a great playoffs run, but the rest of the team proved that TES’ ceiling and potential when they’re on point is scarily high.

Coming into Worlds, we believe the time off will do good for the team and if Knight returns to form and the team plays at their peak, few can stand in their path.

Our #LCK Summer Champions are heading to the international stage! 🏆 Check out this mini-guide to @GenG before the Worlds competition begins! pic.twitter.com/IrZpNzpBFM

Gen. G return to Worlds as the kings of LCK with a seat at the top of our rankings. No other team had a dominant summer from start to finish like Gen.G. With some of the best players in every lane, Gen.G ruled the LCK regular summer split as well as the playoffs.

While the LPL has been the strongest region for the past few years at international events, Gen.G feel like the super team the LCK has to win it all at Worlds 2022.

Moreover, both Chovy and Ruler seem to be in the  form of their life and they’re heading into Worlds with a meta that is not too different from summer split.

Gen.G ended Worlds 2021 with a semi finals win after a narrow loss to EDG. Since then, they’ve changed certain parts of the roster to build a team that is meant to compete with the worlds’ best and dominate while doing so.