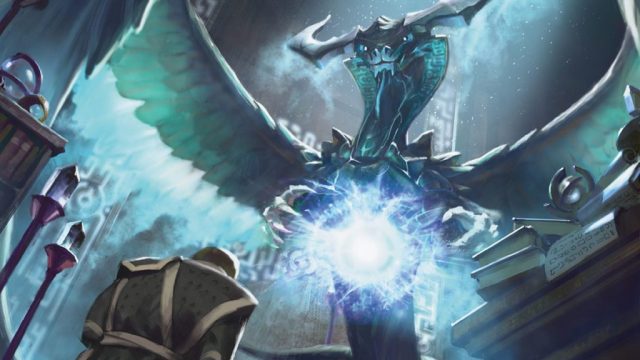 Ugin, the Ineffable, the brother of Dragon-God Nicol Bolas and a legendary Planeswalker with massive story implications, was recently revealed in a leak earlier this week. The official copy of the card was revealed as part of yesterday’s spoilers. We now know that Ugin is officially joining the War of the Spark, and he’s bringing a signature card with him: Ugin’s Conjurant.

Ugin’s Conjurant is a 0/0 Spirit Monk creature. Many players should understand that this stat line causes an issue, as a creature having zero toughness causes the creature to die. Thankfully, there is a way for players to keep this creature on the field as it enters. The mana cost of this creature is X and the card reads “Ugin’s Conjurant enters the battlefield with X +1/+1 counters on it.” This allows the creature to stick to the battlefield when it first enters. It also allows the player casting the spell to choose the strength of this creature.

The second ability on the card states that if any damage were to be dealt to it, prevent that damage and remove that many +1/+1 counters from it instead. This ability makes the card an extremely slippery creature to deal with. While direct damage can still find its way around this ability, it seems much harder to defeat the Conjurant.

Ugin is the brother of Bolas but is also technically dead. Bolas had actually killed his brother. Ugin was then resurrected by Sarkhan as a Spirit Dragon and spends most of his time in the Meditation Plane. We have seen previously how he could use that Plane to help defeat his brother.

Ugin’s Conjurant feels like it plays heavily into Ugin’s theme. Being a colorless spirit monk and sporting the horns of the spirit dragon himself, the conjurant appears to be Ugin’s vessel to the real world.

How to Utilize the Card

Similarly to other cards in the set, Ugin’s Conjurant utilizes +1/+1 counters. Utilizing the proliferate cards that are prevalent in this set, you can consistently buff Ugin’s Conjurant and potentially protect it. It should also be noted that if you have Ugin, the Ineffable or other effects that reduce the cost of creatures, this will allow you to pay less mana for a stronger creature. Other recommendations include adding cards like Hardened Scales and Doubling Season will also boost the power of Ugin’s Conjurant.

Ugin’s Conjurant is overall a great card if you build the deck to build around it. Many players will be looking to use Ugin’s Conjurant in limited formats, but it may have a hard time breaking into the constructed scene. The card is enjoyable in both the flavor of the card and the mechanics of the card.