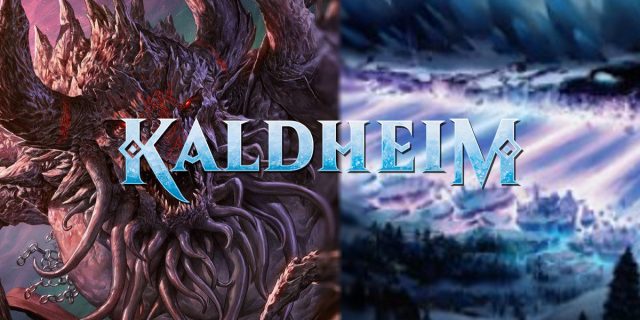 The Kaldheim spoilers are almost complete, and it looks like Wizards of the Coast is saving some of the best for last. A new premier board wipe is headed to Magic: The Gathering, one that has a ton of versatility for players. Not only is a powerful new spell coming in Kaldheim, but a new creature that plays with the new Foretell ability. Here’s how these two Kaldheim spoilers shape up in the upcoming Standard season.

For the longest time, Wrath of God was the best board wipe control that decks could ask for. Day of Judgment filled the same role, a four-mana sorcery that destroys all creatures often secures control decks a steady board state. Five-mana board wipes can feel a little clunky in Magic, often coming just a turn too late for control players to stabilize. Wizards of the Coast is looking to fix that with Doomskar, one of the latest Kaldehim spoilers.

Doomskar comes loaded with the foretell ability. For two mana, players can exile from their hand face down and wait until the optimal time to cast it. Against aggro decks, it may come down on turn three. Against more mid-range decks, turns five or six might be better. The versatility in the casting cost gives control players a chance to back it up with counter-magic later in the match.

The other Kaldheim spoiler is a little more unique as far as card design goes. Dream Devourer is a fairly fragile creature, a 0/3 with no fancy protection or keywords. What it does do, however, is grant all non-land cards in its controller’s hand foretell. The foretell cost is just the card’s casting cost minus two generic mana. Imagine being able to foretell a Burning-Rune Demon two turns earlier? Or dropping an Ugin, the Spirit Dragon on an unsuspecting opponent? Dream Devourer can turn large mana commitments into game controlling plays.

Whether or not Dream Devourer will make an impact on Standard will have to wait and see. Being able to foretell any card in hand may not actually have that big an impact on play. Dream Devourer could get a little more interesting in formats like Commander or Modern. In these formats, cards with a heftier casting cost may be able to shine. Players will need to be careful though, as cards without a casting cost, like Ancestral Vision, become trapped in exile without a way to cast them.