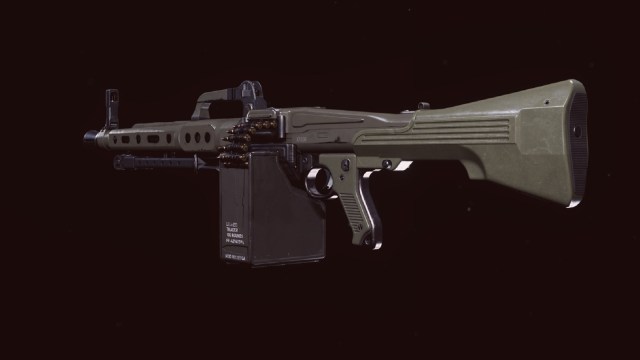 Provided by Activision The gun model for the MG82 in Call of Duty: Warzone.

The meta has been thrown out in Season 5 for many Call of Duty: Warzone players, especially after the recent Reloaded update. Since this is the last season of Warzone and Warzone 2 is close to arriving, many players have opted to go back and use older weapons for sheer nostalgia. Several weapons from Modern Warfare and Black Ops Cold War have seen an increase in the pick rate charts, according to website WZRanked. This, in turn, has caused some weapons to shoot up the kill/death ratio charts as well. It seems that players have discovered some hidden gems in their efforts to use older weapons.

Two of those gems have even gone so far as to become two of the highest KD weapons in Warzone Season 5 Reloaded. That is to say, these two weapons have a high weapon kill/death ratio, with one weapon having the overall best KD of any gun in Season 5 Reloaded. As it turns out, both of these weapons are from Black Ops Cold War.

The two guns in question are the EM2 assault rifle and MG 82 light machine gun. At the time of writing, the EM2 has the highest KD in Warzone, with a 1.45 KD, while the MG 82 has a respectable 1.22, which is good for the sixth-best KD. Many players might be surprised to see these two Cold War weapons atop the KD charts. However, the AR and LMG are solid in Season 5 Reloaded and can easily compete with Warzone’s current meta guns.

Here are the top loadouts for both the EM2 and MG 82 for players to see how strong the weapons are for themselves.

There are few better options than this pair for players looking to change it up before Warzone 2’s November release. They’re perfect to equip in the primary slot on a loadout as the long-range option. Players should have a strong SMG as a secondary to complement either of these weapons, though.