See which games have had the biggest payouts 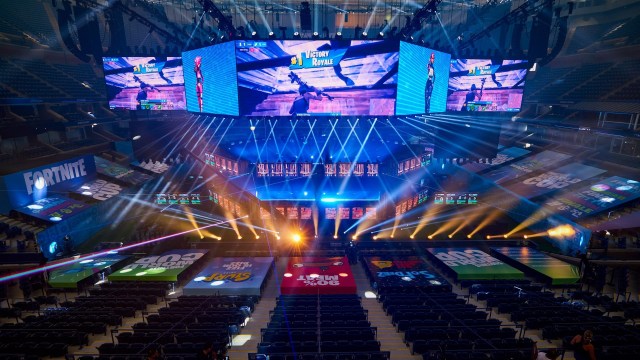 Provided by Epic Games The arena for the Fortnite World Cup Finals 2019.

As the esports industry grows more popular, it has proven to be a lucrative career path for many top players. Of course, the amount of money someone can make in esports doesn’t just depend on how good they are — it also depends on what game they chose to become good at.

While some small games may only have a few thousand dollars up for grabs at their biggest tournaments, the most prestigious competitive video games often have millions of dollars in their prize pots.

Here are the top 10 best-paying esports based on the prize pool of their biggest competitions as of January 2023, according to Esports Earnings.

The Halo World Championship 2016 featured the biggest prize pool in Halo esports history. A line-up of 16 teams competed in Halo 5: Guardians for the lion’s share of the $2.5 million prize pot. Counter Logic Gaming came out on top against Team Allegiance in the grand finals.

Less than a year after the game’s release, competitive Smite peaked with a $2,612,259 prize pool at the Smite World Championship 2015. COGnitive Gaming swept through the pools phase, then reached grand finals against Titan. After a give-game grand finals set, COGnitive Gaming emerged victorious.

For the past few years, Rainbow Six Siege players have enjoyed some consistency in their esports scene. The Six Invitational boasted a $3 million prize pool in 2020, 2021 and 2022. Here’s an overview of the champions at each event:

Eight teams competed for $3.5 million at the Overwatch League Season 2 Playoffs in 2019. There, the San Francisco Shock bested the Vancouver Titan to claim first place. As Overwatch 2 takes over as the format for the OWL, it will be interesting to see if tournament prize pools will reach the same heights they did before the COVID-19 pandemic.

Call of Duty esports saw its biggest prize pool at the Call of Duty League Championship 2020. This Call of Duty: Modern Warfare tournament featured 10 teams competing for $4.6 million. In the end, the Dallas Empire emerged victorious over the Atlanta FaZe.

Despite being one of the most popular competitive games, League of Legends only clocks in at fifth when it comes to esports with the biggest prize pools. While its prize pots have trended downward in recent years, League of Legends saw its peak at the LoL 2018 World Championship with $6.45 million. Invictus Gaming came out on top of a field of 24 teams to claim the grand prize.

Of the top 30 largest prize pools in gaming history, PUBG boasts over a quarter of them. The game reached its peak during the PUBG Global Invitational.S 2021 Main Event, where the prize pool was $7,068,071. While 32 teams came into the tournament, only the Susquehanna Soniqs emerged in first place.

Although it is relatively niche compared to other games on this list, Arena of Valor players have enjoyed numerous large prize pools. At the Honor of Kings International Championship 2022, 16 teams competed for $10 million. Amid a top eight that consisted exclusively of Chinese teams, eStar Pro became the winners.

Both the Solo and Duo events at the Fortnite World Cup Finals 2019 crack the top 10 overall esports prize pools of all time. In the Duo bracket, Cooler Esport’s David “Aqua” Wang and Emil “Nyhrox” Bergquist Pedersen won the lion’s share of a $15.1 million prize pool.

Meanwhile, Kyle “Bugha” Giersdorf won the Solo event, which had a $15,287,500 prize pot. Notably, the Fortnite World Cup Finals 2019 Solo tournament is the only non-team event to make an appearance on this list.

Dota’s The International is the most lucrative esports series by a substantial margin. This series boasts the top seven biggest esports prize pools of all time, along with the No. 10 slot. Even with a large drop in prize money at its most recent iteration, The International still blows all other esports events out of the water.

The highest-paying Dota 2 event was The International 2021, also known as the International 10. Its prize pool was a whopping $40,018,400. With their victory, Team Spirit earned the largest prize payout in competitive gaming history.