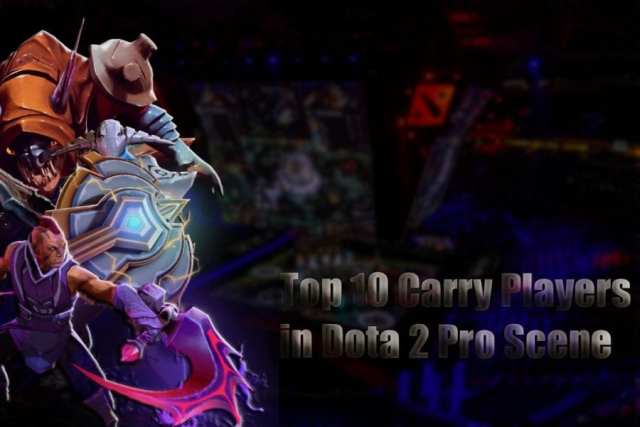 The Criteria For The Carry Player’s Rankings

Now there’s a lot of ways for someone to rank carry players. But I’m gonna use some statistics and how effective players are and how flashy they can be. You can argue that flashiness is not a factor. But secretly, we all love it. Shh. So now, if I may, let’s get on with it!

Our “trihard boi” Artour, has been a very successful carry player since a long time. With his heroes hardly ever dropping below 500 GPM, he has established himself to be an amazing carry player. His most played hero on his main Steam account is Shadow Fiend. And even if he rages more than often, you can really see how flexible and quick he is with his heroes. Especially when he plays with his team, EG.

VP.ramzes666 is truly one amazing player. Besides the fact that he has “Kush” in his last name, his carry playstyle is even more dank.  Even while being a carry, he doesn’t just jump into the enemies. He kites the enemies a lot to bring them in a position good enough for team fights. But that’s just how VP is. With very good GPM and KDA records, he’s definitely taking the second spot. His Lifestealer can surely be considered his signature hero.

Wings Gaming’s carry player Shadow has made a name for himself with Juggernaut. His performance on the hero has always been astounding as he makes very sick plays with the hero in tournament games. Add that with the weirdness of Wing’s drafts and baam you get some amazing games right away. Those words are not completely what I want to express my thoughts with. But you get the picture.

First off, yes that is one weird name. And honestly, his playstyle is even more weirder. Even though he’s a carry player primarily, he sometimes switches to mid lane. His gameplay is very unorthodox. He makes space for his midlaner quite more often than an offlaner would, let alone a carry. His most successful heroes have been Timbersaw, Morphling and Naga Siren.

You did not know he has the same first name as ramzes, did you? Resolut1on is a very classic type of carry player. He’s one of those guys who doesn’t jump into any fights unless he’s certain of winning the fight. And he’s the carry we all wish we had in our team in pub games because his GPM basically never drops below 600. He’s a very effective carry player and his most effective hero is… you guessed it, it’s Luna. But he has great records on Lone Druid and Anti-Mage as well. Anti-mage pickers… They think they’re good. Except Resolut1on actually is, with an 80% winrate on the hero.

This is all for now, a second installment of this article shall soon be released. Yes guys, judging others in a criteria actually takes time. Only if I was talking about Pewdiepie I could add literally anything about him here. Until next time, keep racking those +25s up boyz!