V5 continue their undefeated streak against EDG while TT fend off iG. 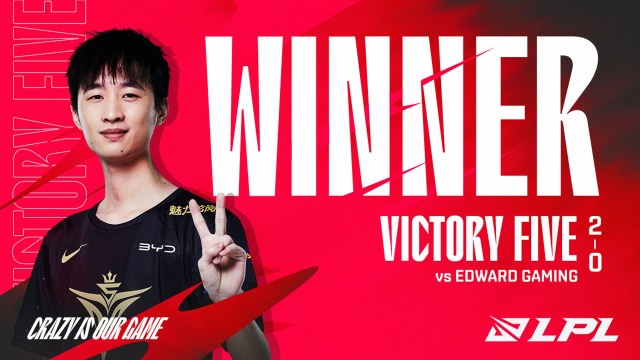 Provided by @lplenglish V5 cannot be touched so far in the 2022 LPL summer split.

The 2022 League of Legends Pro League summer season is well underway, with games happening every day of the week. For fans that don’t have time to watch all the action, but want to know what is going on, we at Upcomer are here to provide a daily recap of each day’s games. Here is what happened today in the 2022 LPL summer season.

After starting the season 1-1, Invictus Gaming came into their final Week 5 match against ThunderTalk Gaming on a five series loss streak. With nothing going their way, iG have decided to run an unorthodox bot lane of An “Ahn” Shan-Ye and Zhang “Wink” Rui, with Wink playing support. TT, on the other hand, have had a decent season so far; they’re even part of the playoff conversation.

Game 1 was rough for iG, as TT took the first three kills and never looked back. 20 minutes in, TT ballooned the kill lead 11-3 in their favor with the team on Dragon Soul point and a 4k gold lead. The game dragged on for about 10 more minutes before TT spiked hard enough to close the game out with a 23-5 kill advantage and a 13k gold lead.

Game 2 started out in a similar fashion with TT once again getting out to a massive kill lead; 7-0 in their favor, to be exact, while they also had a 5k gold lead just 19 minutes in. However, the TT squad bit off more than they could chew, as over-aggression cost them an already won teamfight which allowed iG some breathing room. With iG on fresh legs, the team started to run the map; with TT playing off the backfoot, not only did iG erase the gold lead, they took it.

27 minutes into Game 2 and iG finally had their first gold lead of the series, but TT still had the Dragon Soul win condition, with them already at three dragons. iG would end up denying TT the win condition as they reached theirs; a wild teamfight in the mid lane 32 minutes in went 5-2 in iG’s favor as they had enough time to clean up the enemy base and force a Game 3.

Game 3 once again was in TT’s favor in the early game with the team getting off to another massive lead. 21 minutes TT had a 6k gold lead and a 16-6 advantage in kills. Learning from their  mistakes in Game 2, TT didn’t get overly aggressive and took calculated fights which obviously worked much better as they made quick work of iG in 31 minutes and take the series 2-1.

In what some had pegged as the matchup of the week, the reigning world champions Edward Gaming took on the current best team in the LPL Victory Five in a showdown for positioning as playoffs inch closer. While V5 have looked unbeatable, EDG have been a shell of their former selves but still good enough to hang around the top third of the standings.

Game 1 was not pretty for EDG; they couldn’t even win a single teamfight. V5 had complete control of the game from the 13 minute mark onwards. An early 22 minute Baron by V5 opened up the game, and just a couple minutes later, V5 had a 8k gold lead and were on Dragon Soul point. But they didn’t even need it, with a last ditch effort for EDG at Baron, V5’s bot laner Ying “Photic” Qi-Shen who was already fed on Kalista turned around and aced the EDG squad himself with a Pentakill as V5 took Game one in 29 minutes.

Back and forth. Push and pull! Rich is just unkillable! #LPL #CrazyIsOurGame pic.twitter.com/wIsjzXI7Id

Game 2 was more of the same, but EDG actually kept the game close until around the 19-minute mark. After a misstep at Dragon, the game tipped towards V5 and they ran with it; however, with no team stacking dragons, every fight around them was intense. EDG did the best they could do at a 28-minute dragon fight — despite being down 3k gold — but after a long drawn-out skirmish, V5 were able to take the fight 4-1 in their favor. A Baron soon after gave V5 all they needed to chase down EDG and clean the series up 2-0.

Week 5 of the 2022 LPL summer split has now officially ended, but fear not, Week 6 hits the ground running tomorrow, July 11, with the first two matches pitting FunPlus Phoenix against LNG Esports and JD Gaming against Rare Atom. The action kicks off live on the LPL Twitch channel at 5 a.m ET.