Kola is crowned king of Georgia 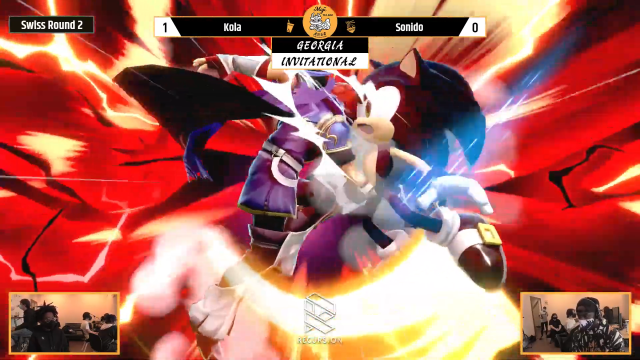 Provided by Recursion Kola lands the finishing blow against Sonido during the second round of Swiss pools.

With an array of top 50 players, fast-rising up-and-comers and other high-level players who rarely travel out of region, Georgia has become one of the most stacked regions for Super Smash Bros. Ultimate in the United States. Sixteen of the state’s best got to compete in person at the Maji Georgia Invitational from July 19-20.

Here are three of the biggest takeaways from Georgia’s stacked offline invitational.

Whether competing in person or online, Kolawole “Kola” Aideyan has proven himself to be a consistent threat to many of the best players in North America. The InfinityCON champion showed off his offensive prowess with Roy and Cloud once again by winning the Maji Georgia Invitational.

Kola started the Swiss phase of the invitational with 2-0 wins over Louis “Vivid_NGL” Jean-Guillaume and Leon “Sonido” Green. However, he faltered in the next round against Cameron “Vendetta” Garrett, winner of the SWT NA Southeast Ultimate Online Qualifier. Even so, Kola beat Khalil “Mugen” Malik 3-0 in the Roy ditto to advance into top eight as the third seed.

Despite his upset loss to Vendetta on Day 1, Kola looked near unstoppable in the second phase of the tournament. He breezed through Griffin “Fatality” Miller and “DDee” without dropping a game. In winners finals, Kola defeated Carrington “Wrath” Osborne 3-1, losing only one game due to an accidental self-destruct in Game 3.

Kola faced Fatality again in the grand finals. Fatality entered the set with momentum after a convincing losers run. Nevertheless, he only managed to take one game off of Kola. Thus, with his strong punish game and ledgetrapping, Kola secured first place at the Maji Georgia Invitational.

Earlier this year, Captain Falcon received what seemed like a minor buff, becoming less vulnerable after grabbing an opponent with his Up-B. But Fatality, one of Smash Ultimate’s premier Falcon mains, was confident the slight change made Captain Falcon significantly better. He got the chance to show off the new and improved Captain Falcon at the Maji Georgia Invitational.

Despite his character’s recent buffs, Fatality initially struggled at this tournament. He lost his first two matches against DDee and Keiyun “Axel~” Wright. In addition, Fatality narrowly escaped elimination in the next round, defeating Jackson “Jax” Ballow 3-2. Afterward, he beat “Kota” 3-1 and Jaden “Namefireball” M. 3-0 to secure a spot in the main bracket.

Fatality did not immediately fare much better in top eight than in pools, losing 3-0 to Kola. However, no one else seemed to be a match for him. Fatality found creative ways to combo into Falcon’s powerful forward-air. He got early kills with aggressive offstage edgeguards, especially on stages where he could wall jump; and frequently used Up-B as a strong out-of-shield option. Using these tools and more, Fatality defeated Mugen 3-1, Sonido 3-1, DDee 3-0 and Wrath 3-1.

Got 2nd at the GA Maji Invitational, beating Mugen, Sonido, Ddee, and Wrath, before losing to Kola at the end. Roy has been a personal bad MU for me for ages, but I'm finally feeling like I'm getting a better handle on it, Kola was just better today. He's top 10 in the world IMO.

DDee first rose to prominence in the Smash community in March of 2020 after running into Ezra “Samsora” Morris on quickplay and performing well against him in a series of matches with Pokémon Trainer. Now, with Steve as his main fighter, 14 year old DDee has proven that he is much more than a mere wi-fi warrior.

DDee advanced out of pools as the second seed after a series of unexpected upsets. He beat Fatality 2-1, Namefireball 2-1 and Wrath 3-2 in order to advance into top eight without dropping a set. In the main bracket, DDee swept both Mugen and Vendetta without dropping any games.

Ultimately, DDee only dropped sets to the top two finishers at the Maji Georgia Invitational. From his ability to set up blocks and protect himself while mining to his explosive combos, DDee has shown not only his own potential as a player, but also the potential of Steve to be a viable threat offline.

4th/16 in the invitational

Lost to kola and fatality in the run back