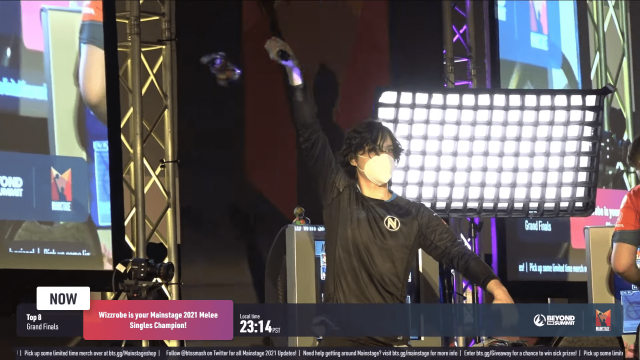 Provided by Beyond the Summit - Smash via YouTube Wizzrobe celebrates his victory by swinging his controller around above his head.

Another Super Smash Bros. Melee major has come and gone without Zain “Zain” Naghmi or Joseph “Mang0” Marquez vying for the first-place prize. As a result, the field was open for another competitor to win his first major tournament of the year.

Here’s a closer look at Justin “Wizzrobe” Hallett’s victory and other takeaways from Mainstage 2021 Melee Singles.

In May of 2019, Wizzrobe returned after months of inactivity and unexpectedly won his second tournament of the year, Smash ‘N’ Splash 5. It was his first time winning a major and the first time any Captain Falcon player had won a major since Joel “Isai” Alvarado in 2005. Then fast forward to 2021, where Wizzrobe has placed a middling fifth at three consecutive majors. At Mainstage 2021, Wizzrobe proved that he can still come out of nowhere to win a national Melee event.

Wizzrobe not only triumphed over every opponent in his path at Mainstage, but he did so convincingly. Throughout the entire tournament, no one could push him to Game 5. Surprisingly, his closest call came in the second round of pools, where he beat William “Wevans” Evans 2-1. But afterward, Wizzrobe’s performance was near immaculate.

He beat Eduardo “Eddy Mexico” Lucatero Rincón 3-1, Joey “Lucky” Aldama 3-0 and Jeffrey “Axe” Williamson 3-0 en route to top eight. Then, he earned a 3-1 win over Avery “Ginger” Wilson, who had upset Cody “iBDW” Schwab one round prior.

Finally, Wizzrobe faced Juan “Hungrybox” DeBiedma, the same titan he overcame on his way to winning Smash ‘N’ Splash 5. Hungrybox barely proved to be a threat, as Wizzrobe beat him 3-1 in winners finals and 3-0 in grand finals. Thus, Wizzrobe secured his second victory at an offline major to date.

KoDoRiN is a beast with a bracket full of Foxes

John “KoDoRiN” Ko has consistently been a top-level threat at post-quarantine Melee majors. He has placed ninth or higher at every tournament he has entered, with Mainstage 2021 being no exception. Of course, one particular factor has proven to be a major boon for the Marth player: a bracket full of Fox players.

In this regard, Mainstage proved to be quite gracious to KoDoRiN. He beat Brandon “Panda” Orooji 3-0 in round one of top 64, although he did find himself facing Captain Falcon main Jason “Gahtzu” Diehl shortly thereafter. Nevertheless, KoDoRiN overcame Gahtzu 3-2, setting him up for a smooth run through the remaining Fox players in his bracket.

During his run in top 16, KoDoRiN double-eliminated Zachary “SFAT” Cordoni, winning 3-0 in winners quarters and 3-0 in losers semis. He is now 3-0 against SFAT at offline events this year, despite SFAT’s proficiency at the Marth match-up on account of his former Doubles teammate and practice partner, Kevin “PewPewU” Toy. Additionally, KoDoRiN eliminated No. 1 seed iBDW in losers quarters. Ultimately, he finished in third place, only losing to Hungrybox in the process.

I think I'm the only free agent going to summit and SWT finals??

Zealot is quietly but quickly rising

Top 12 of the Mainstage 2021 Melee bracket featured a myriad top 100 players… and Anthony “Zealot” J. Although Zealot has never been ranked in the top 100, he has been quietly accruing better and better results throughout this year, culminating with his breakout offline performance at Mainstage.

Prior to the return of offline competition, Zealot performed consistently well at online tournaments in 2021. He racked up wins over the likes of Sasha “Magi” Sullivan, Steven “FatGoku” Callopy and Ben “Ben” Strandmark, all while avoiding egregious losses. At his first offline major of the year, Riptide, Zealot finished in a respectable 25th place. In addition, he has won regional-level events over the likes of Daniel “Zamu” Bernstein and Drew “Drephen” Scoles.

However, the pieces finally fell into place for Zealot to make a deep run at a major at Mainstage. He beat Isaac “bobby big ballz” P. 2-0, Cruz “OkayP.” Peterson 3-1, Fernando “Far!” Dorame 3-0, Luis “Smashdaddy” Rangel 3-1 and Hugh “SluG” Hegarty 3-2. As a result, Zealot finished in ninth place while only dropping sets to SFAT and Axe.

It's never too early to start preparing…

The #SmashSummit 12 process begins NEXT week, with opt-ins opening on Monday 💫

The following players qualified for Smash Summit 12 by finishing in the top six of this event:

They will join Zain, Mang0, Masaya “aMSa” Chikamoto and Linus “Pipsqueak” Nordin, all of whom received direct invitations. Opt-ins for the Smash Summit 12 voting process begin on Nov. 15 and the tournament itself will take place from Dec. 9-12.