"There was just something off": Fnatic coach mini reflects on VALORANT Champions Tour performance - Upcomer

“There was just something off”: Fnatic coach mini reflects on VALORANT Champions Tour performance

Mini: 'I'm actually just excited to go to Champions because that's just another opportunity to prove we can get to a grand final and — hopefully — win it.' 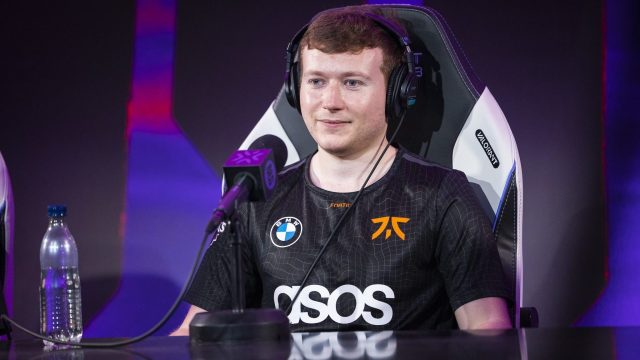 With franchising on the horizon for the VALORANT Champions Tour, even more weight has been put on the upcoming Champions 2022. It’s the last event for teams and players to showcase themselves before the highest level of VALORANT consolidates and shrinks substantially. For Fnatic and head coach Jacob “mini” Harris, it’s another chance to lay claim to the title of the best team in VALORANT.

“I’m actually just excited to go to Champions because that’s just another opportunity to prove we can get to a grand final and — hopefully — win it,” mini said in an interview.

With two years of the VCT in the rearview mirror, Fnatic can take stock and be pretty happy with how things have went. They’ve got Jake “Boaster” Howlett, one of the biggest names in the game. They’ve had a consistently high level of success with plenty of events under their belts. And they’ve all but secured a partnership spot in 2023. The one thing Fnatic don’t have is an international tournament win.

The recently concluded Masters Copenhagen was set up to be their best chance yet.

Fnatic came into Masters Copenhagen as arguably the favorite to win it all. They looked like the undisputed kings of the Europe, Middle East and Africa region. Unfortunately, losses to the eventual grand finalists — Paper Rex and FunPlus Phoenix — led to a fourth place finish.

“I think we underperformed this event quite a lot,” mini said. “The reality is I think that we were positioned to get to the grand final with how good we were looking before the event.”

It’s hard to say where it all went wrong for the team. Even within Fnatic, no one is fully sure of what led to them falling short.

“This event, there was just something off,” mini said. “I can’t put my finger on exactly what is was, I think it was a combination of things.”

The obvious answer is that their competition was just a shade better than them. And while Fnatic may not have been super familiar with Paper Rex, FPX are a team that they’re well-acquainted with from EMEA. Losing to them in the lower bracket semifinals certainly stung for the squad in orange.

“When you don’t miss a single shot and your team is strategically good and you have a caller like [Kyrylo “ANGE1″ Karasov] and your preparation is good, of course you’re gonna be making a good run,” mini said. “It all came together for them.”

Luckily, there was some pleasure mixed into the business for Fnatic at Masters Copenhagen so it wasn’t all doom and gloom. According to mini, it was the first VCT event where COVID-19 restrictions were lessened enough for the team to enjoy themselves out in the city.

“It felt like we were humans for once instead of in the dark playing the entire time,” mini said.

It was also a chance to connect with the VALORANT fans, many of whom had travelled from across the globe to be at one of the first VCT events with a crowd. For mini, the experience was as exciting as it was strange.

“I’m like a D-list celebrity, you know?” he said. “So it’s interesting that people actually come up and ask for your photo.”

As far as VALORANT orgs go, Fnatic has a sizeable contingent of fans. Yes, that has a lot to do with the brand and the team’s success, but mostly it has to do with Boaster.

Thanks to an excess of on-screen charisma, Boaster has become VALORANT’s protagonist. So much so that he often steals the spotlight, sometimes even from other Fnatic members. But what fans of the team may not understand is that Boaster is also responsible for pushing his teammates into a bit of showmanship of their own.

“What Boaster’s good at doing is getting people out of their shell a little bit so that when the camera is on them, they’re not just completely silent,” mini said. “It’s not something to cringe at or be embarrassed by.”

The mentality that there’s more to esports than grinding out matches and dominating opponents is something that mini encourages within the team.

“I’ve always been very honest to the boys that it’s not just about winning,” he said. “There is an element of showmanship that needs to be had in esports. I mean, it is entertainment.”

As for Boaster, the performative element of being at the top of a major esport is just a part of who he is.

“Even if there wasn’t extra financial incentive involved to doing these things, I’m very sure he’d still be acting like an idiot on the camera,” mini said.

There’s no coach/in-game leader partnership in VALORANT more iconic than mini and Boaster. The two have been the glue binding Fnatic together since the team’s inception. Together, they’ve constantly redefined the competitive meta and propelled their team forwards.

The two Brits had a history in Counter-Strike, but neither was able to carve out a serious living from the game. When VALORANT was released, mini was working as a graphic designer. He saw that some of his friends were making serious salaries in esports and decided to take the plunge. He teamed up with Boaster and the rest is history.

“It’s been a bit of a Cinderella story for me Boaster, working together since that start and got picked up together,” mini said. “Our relationship’s maintained through the Fnatic period.”

Throughout the first two years of the VCT, Fnatic has been a constant at the highest level. Besides always have strong individual players, the biggest reason for their success is their deep, constantly-evolving playbook. A playbook that is built by mini and Boaster.

“Me and Boaster just talk all the time about the game,” mini said. “I think Boaster’s the most creative mind in VALORANT. I don’t think that’s even a hot take. The amount of stuff I’ve seen stolen that’s directly his creation is incredible.”

Fnatic’s playbook is constantly changing. Even before Masters Copenhagen had finished, mini and Boaster already had ideas they wanted to implement. Now, the team has a month before Champions 2022, the culmination of pro VALORANT.

The event is being held in Istanbul, Turkey. Thanks to their 17-year-old duelist, Emir Ali “Alfajer” Beder, Fnatic are poised to be the home crowd favorite. Alfajer will be the one and only Turkish player in attendance.

mini advised that the team not have a lengthy bootcamp ahead of Champions. According to mini, Fnatic have a healthy practice rhythm at home, which also helps give the team some rest. Even though they’re spending all day practicing, they can switch off and get some rest in the evenings.

“The plan is we practice a lot from home and just before the event starts, we’re going to go to Turkey and just have a few days maybe doing some media and doing some fun stuff,” mini said.

Champions is the last event for competitive VALORANT as we know it. There’s no telling what the esport will look like in 2023. The one thing that seems an immutable fact is that mini and Fnatic will still be at the cutting edge of the game.

“We’re excited to get going again for Champions,” mini said. “We thank all the fans for the support and we’re gonna be working our hardest to get a win at Champions. Cause we’re overdue a win.”