"The event gave them the courage to explore who they are or to come out." 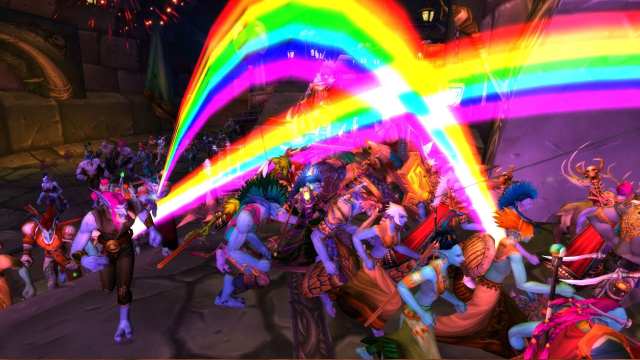 Provided by @Dravvie on Twitter World of Warcraft players participate in the Running of the Trolls.

Every year, the World of Warcraft community holds its annual Running of the Trolls event, which takes place during Pride Month and supports The Trevor Project, whose mission is to prevent suicide among LGBTQIA+ youth.

The Running of the Trolls begins at 9 p.m. ET on June 27 on the Feathermoon-US server. World of Warcraft players can log in as a level 1 Troll character and be invited to a participating guild. The current guild names include Running of the Trolls, Troll for Initiative and Trollkyo Drift. From there, players will take a zeppelin to Tirisfal, travel through the Plaguelands, take the Ghostlands portal and aim for Silvermoon City.

According to Dravvie the event organizer, players can even participate if they don’t have a subscription to the game by using a trial or veteran account. The important thing, she said, is to demonstrate the power of representation, community and help when it doesn’t exist at home.

“Until I was 13, I lived a rural town where queerness really wasn’t accepted, and this was before the internet was as powerful as it is now,” Dravvie said. “Now people have the power to connect even if they don’t live somewhere where their own community will uplift them.”

Organizing such a massive event goes well beyond just picking a day and a time, Dravvie said. It involves networking, creating promotional content, planning merchandise, setting up information pages and beta-testing ideas before participants show up. This process is even refined every year to improve the next Running of the Trolls.

“If you stay organized, you can work partly off of what you have done before,” she said. “Twice in all my years of doing these, both for the Trolls and Gnomes, the route changed and it was a big panic testing and retesting things.”

“The big aspect of it is the day-of and getting everyone into guilds and so on, but we have a specialized addon to assist us made by Ellypse, which was a game changer in being able to interact more with people and still do our jobs,” Dravvie said.

In addition to being a digital parade, Dravvie said the Running of the Trolls event actively shows that there are members and supporters of the queer community in World of Warcraft.

“While many people have pride events they can just attend in real life, there’s restrictions for many, such as work, disability, countries not holding them, distance, but also not being out of the closet,” Dravvie added. “Families are able to go together, people run in honor of friends.”

The Running of the Trolls also allows people to celebrate Pride Month in a safe manner due to the COVID-19 pandemic. World of Warcraft players are encouraged to bring toys like Rainbow Generators to celebrate the event while travelling across Azeroth.

Another part of important part of the Troll Run is the sense of community built in the various guild chats. People share their experiences being members of the LGBTQ+ community with those who support and understand them. According to Dravvie, the event often gives participants the courage to explore their own identities fully.

“I’ve been told a few times now, by individuals [who] were questioning their sexuality or just allies at that time, that the event gave them the courage to explore who they are or to come out,” Dravvie said. “It makes me really happy, and even happier to get to watch them blossom as people.”

Players who wish to stream the event or make a video about it are encouraged to share the link to the fundraising page as well. For streamers, it’s advised to clarify between personal and fundraiser donations. To share content for the Running of the Trolls event on social media, participants can use the #TrollRun2021 hashtag.