Falcons and a fellow mid-tier could stand in his way 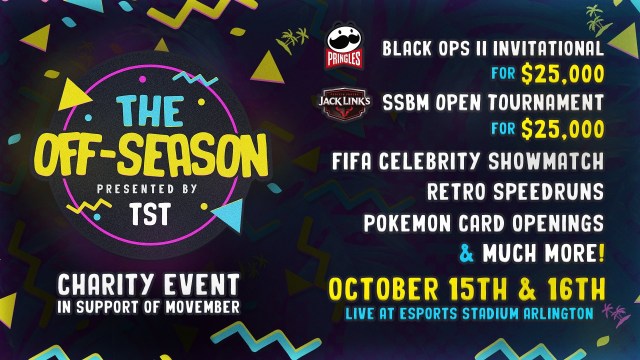 Provided by @hitchariide via Twitter The Melee invitational is only one part of the busy schedule for this charity event.

This weekend, OpTic Gaming and Team Summertime are hosting a charity esports event in Arlington, Texas, to raise money for suicide awareness and prevention. The event will feature Pokémon card openings, a FIFA celebrity showmatch, and invitationals for both Call of Duty: Black Ops II and Super Smash Bros. Melee.

On the Melee side, all eyes will be on Masaya “aMSa” Chikamoto, who recently earned his first major victory at The Big House 10. Here’s what to expect from aMSa at The Off-Season and who his toughest challengers could be.

"The Off-Season" presented by Team Summertime

Hope to see you there 💚 pic.twitter.com/mL8otQ7pQL

What it takes for another aMSa victory

The odds of an aMSa victory at The Off-Season are quite high, and not just because of his breakout first-place finish last weekend. aMSa also boasts a flawless record against the other prospective frontrunner, Jake “Jmook” DiRado. He is not only 2-0 in sets against Jmook, but also 6-0 in games.

However, the fact that the line-up of invitees includes three Captain Falcon players could bode poorly for aMSa. While he won his most recent set against a rusty Justin “Wizzrobe” Hallett, he also lost to Edgard “n0ne” Sheleby earlier in the year. In addition, the match-up has historically caused him trouble, as proven by his 2-8 lifetime record against Wizzrobe. As a result, Johnny “S2J” Kim, Wizzrobe and n0ne could all threaten aMSa’s chances of winning this event.

Likewise, aMSa may hope to dodge Jeffrey “Axe” Williamson at this event. Their only post-quarantine set prior to now came at Smash Summit 11, where Axe beat aMSa 3-0. While aMSa has had better results overall this year, Axe’s rapidly-improving results suggest that he could still pose a problem for aMSa.

Other players to watch at The Off-Season

Alongside the eight main invitees, there will be another eight players who join them through an open qualifier. Players who are likely to qualify include Texans like Isaac “bobby big ballz” P., Christian “Salt” Rennie, Duncan “SDJ” Meara, and Davis “Palpa” Scherer. In addition, California native Zac “SFAT” Cordoni will likely be the top seed in the qualifier bracket.

Meanwhile, another interesting player to watch out for will be New Zealand’s Te Tuhi “Spud” Kelly. Once ranked No. 1 in Australia and No. 38 in the world, Spud is coming out of a two-and-a-half-year hiatus from competition. He made his formal return at The Big House 10, where he defeated Armand “ARMY” Del Duca en route to a respectable 33rd-place finish. With fewer top-level threats in attendance, Spud could make a deeper run at The Off-Season.