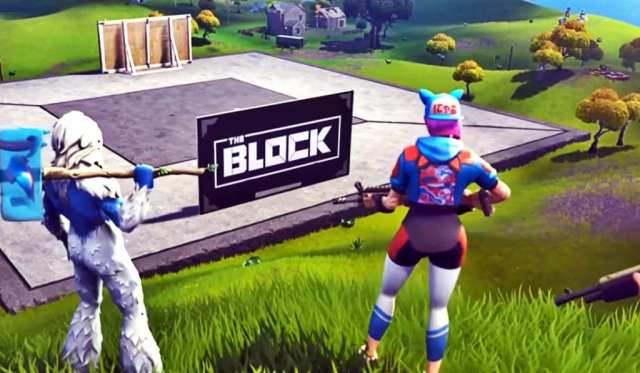 Risky Reels is gone. Say goodbye. This follows an announcement by The Game Awards 2018 that a special premiere would be happening for Fortnite Battle Royale. The community speculated that this would entail some sort of in-game event – and they were right. The Block was shown to drop at the Awards, right on top of Risky Reels, a la Dorothy’s house in Wizard of Oz.

So what is The Block?

The Block is a brand-new area on Fortnite‘s Battle Royale island that will showcase top player-made content. This is linked with Fortnite’s new Creative Mode. This is basically a sandbox mode in Fortnite where players get their own island to create whatever they want. This mode is available to all members with Battle Pass on December 6. In order to be featured on The Block, players need to build something in Creative Mode. Then, using the hashtag #FortniteBlockParty, they must post it to social media. It has to be a 25×25 tile area on a flat section of the player’s island, and Epic urges players to keep memory to less than 50,000.

Tell me more about this Creative Mode

Fortnite Creative will let players design their own games and play them. They can edit the map, race around the island and much more in this sandbox. It is available first for Battle Pass owners, with everyone able to dive into the mode December 13. There’s also a free-roam style flying ability, allowing players to go wherever they please on their map at will. It also comes with ‘prefabs’ – short for prefabricated – buildings already-made that players can place on their island with ease. Director Donald Mustard stated on Twitter that Creative Mode is ‘just the first step’ in letting fans build their very own Fortnite.

Are you excited for The Block and Fortnite Creative? Will you buy a Battle Pass? Let us know!