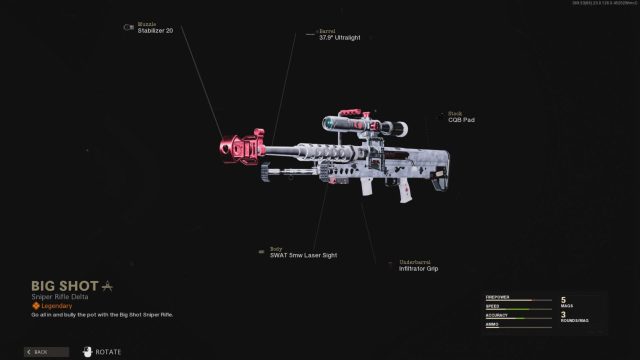 Provided by Activision The gun model for the ZRG 20mm in Call of Duty: Warzone.

The sniper class in Call of Duty: Warzone has been nearly dead for multiple seasons. Ever since Raven Software made it almost impossible to one-shot kill with a headshot using a sniper, players have largely stopped using any weapon in the class. However, players that still want to attempt sniping in Warzone have a few different option, including the ZRG 20mm, which is widely regarded as the current best long-range sniper loadout in Warzone.

The ZRG 20mm is the reincarnation of the Barrett .50 Cal in Warzone. It’s big, bulky and fires a giant bullet. However, even with all of this going for it, the ZRG 20mm also struggles to one-shot kill enemies, even with a headshot. While it’s theoretically more possible to do using the ZRG 20mm, it’s still very difficult to pull off, especially at longer ranges, which is where the ZRG thrives. Nevertheless, if players want to try out the ZRG 20mm in Season 4 Reloaded, they’ll need to use its best set of attachments to maximize their success with it.

To see the full loadout for the ZRG 20mm in Warzone Season 4 Reloaded, keep reading below.

This loadout mainly aims to increase the ZRG 20mm’s overall mobility. Since the sniper is so bulky, players will move quite slowly with it, especially when trying to aim in on an enemy. With attachments like the SWAT 5mW Laser Sight and Airborne Elastic Wrap, players will be able to bring up their weapon quicker. This makes closer-range gunfights much more feasible with the ZRG 20mm.

While snipers are largely unused in Warzone Season 4, the ZRG 20mm is one of the best long-range options players currently have.