The Vaznev-9K is among the best SMGs in multiplayer 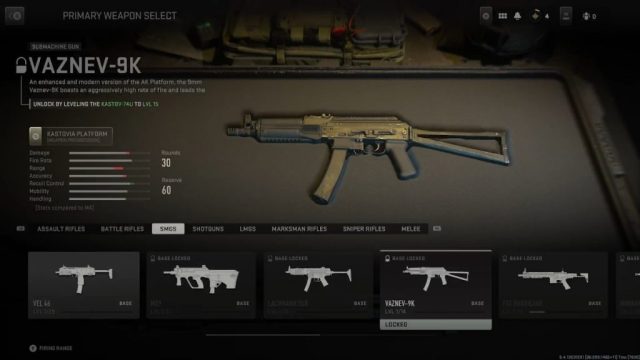 So far in Call of Duty: Modern Warfare 2, there has been no set meta established, even in the slightest. While there are certainly guns being used more than others in multiplayer, this mainly stems from the fact that these weapons are simply unlocked first. In the competitive scene, professional players are still figuring out which weapons are considered a length above the rest.

However, there is one common sight among pro players, specifically the SMG players. That sight is the Vaznev-9K being used as the top SMG in Modern Warfare 2, mainly in part thanks to its best loadout.

The Vaznev-9K is a part of the Kastov Weapon Platform. In order to unlock it, players need to first level up the Kastov-776, then the Kastov-545, and finally the Kastov-74u. Once those guns are leveled up to the right rank, players will be able to equip the Vaznev-9K Receiver and begin leveling this SMG up in the Gunsmith. After players have ascended to the SMG’s max level, they will be able to equip its strongest loadout, which is recommended by the pros.

The Vaznev-9K is incredibly strong at both close and medium range. With the right attachments, it has virtually no recoil, solid damage range, and great mobility. This is all capped off by an above-average fire rate that usually gives players an upper hand in gunfights.

If players really want to use the Vaznev-9K as more of an assault rifle, they can equip the SA Response III barrel over the Kas-1. However, this barrel decreases mobility across the board, so it’s not recommended for those who want to play at closer ranges. This loadout is professionally approved, primarily being used by OpTic Texas’ Anthony “Shotzzy” Cuevas-Castro.