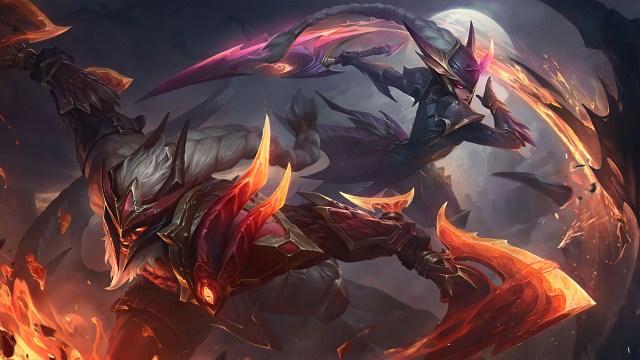 Provided by Riot Games Olaf and Diana created the backbone for the best comp in the TFT Set 7.

2022 has finally come to an end and it’s been a long but fulfilling year for Teamfight Tactics with its most ambitious year on record. With four major updates to the game as well as the continuation of the game’s most impactful set, TFT: Gizmos & Gadgets, there were plenty of memorable team compositions that captured love and hate from the community. Here are Upcomer’s picks for the best TFT comps from 2022.

2022 started out with a bang as TFT: Gizmos & Gadgets was in full swing in the first patch of the new year and with it came the best comp of the expansion, Socialite Kai’Sa. The gimmick here was simple, abuse the Socialite trait to super-boost a hyper-carry champion. While the Socialite hex was indeed powerful enough to have a single champion solo carry a game, the randomness of the Socialite hex excluded a ton of potential carry candidates except one, Kai’Sa. Because Kai’Sa is a ranged character that dances around the board, it didn’t matter where the Sociliate hex was, she would be able to avoid all challengers while winning players a ton of games.

Innovator might have the longest reign at the top of the tier list in TFT history as it was an S-Tier comp throughout the entirety of TFT: Gizmos and Gadgets. The trait brought in an unparalleled support structure with multiple champions fulfilling the half-utility, half-carry role and with secondary traits that were so easy to flex, slotting in a powerful four-cost champion like Orianna or Jhin (or both!) made the comp too hard to nerf as the depth was too much to handle.

Assassins have historically been problems in TFT due to them cheating the front-to-back fighting system by diving into the backline. Essentially, Assassins have either been useless or beyond broken in metagames and one of the most egregious examples of this was when Scalescorn Assassins completely took over the game for multiple patches in the middle of TFT: Dragonlands. Because it was so easy to acquire an Assassin Emblem and how good at making Olaf an Assassin was, anyone could force the powerful Assassin Olaf composition at will which completely nullified even the most high-roll boards.

The most insane thing to happen in TFT in 2022 was the opening of the dragon floodgates in the mid-set expansion for TFT: Dragonlands. With players no longer restricted to one Dragon champion per composition, players quickly realized that instead of adding two Dragons to a composition, the best comp was actually just to throw in as many Dragon champions as possible. A five-champion board was the best comp throughout the entire expansion with no other comp having nearly as strong of a cap.

2022 wraps up with the introduction of TFT’s eighth expansion, TFT: Monsters Attack!, and although the expansion is just two patches in, there has definitely been a comp that has risen above the rest in terms of power level. During the month-long end-of-year patch, Yuumi received a mana buff which set off a domino effect of realizations for the player base. Using the power of the Mascot and Supers traits, Yuumi reroll was born and immediately the cat became public enemy number one in both actual League of Legends and TFT.