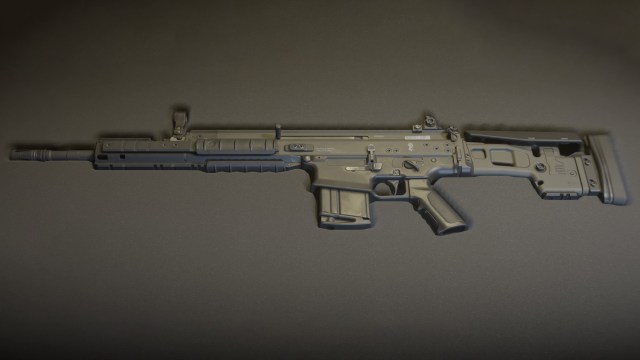 Provided by Activision The gun model for the TAQ-M in Call of Duty: Modern Warfare 2.

The TAQ Weapon Platform in Call of Duty: Modern Warfare 2 features some of the best guns in all of multiplayer.

The TAQ-56 assault rifle is arguably a top two weapon in its class while the TAQ-V is a highly underrated battle rifle that can deal some serious damage. Then, rounding out the platform is the TAQ-M, which rarely gets seen in a multiplayer match unless players are camo grinding. However, the TAQ-M is a surprisingly strong weapon from the marksman rifle class that possesses a fast-killing loadout in Modern Warfare 2.

Though the TAQ-M is classified as a marksman rifle, players can think of it more as a battle rifle. It’s a semi-auto weapon instead of a bolt-action like the SP-R 208 and SA-B 50. This means players can fire the weapon as fast as they can press the firing trigger. Essentially, players themselves determine how the TAQ-M performs; if they can hit their shots, the weapon can be a monster. However, if they don’t, they’ll be taken out within the blink of an eye. In order to ensure that players have the former experience, they need to use the recommended set of attachments for the TAQ-M.

For our TAQ-M loadout, we’ll be focusing on mobility more than anything else. The TAQ-M already has fantastic accuracy, and a few mobility attachments won’t reduce that accuracy enough for players to notice. Basically, we’re going to turn the TAQ-M into a slower assault rifle.

We begin with the Polarfire-S muzzle, which is a suppressor that offer extra damage range, bullet velocity, and recoil control at the cost of ADS speed. However, we immediately get that back plus more with the FSS OLE-V Laser and Demo Cleanshot Grip. Those attachments improve ADS speed and sprint-to-fire time to give players a better chance against enemies at close-mid range. Finally, we have the 15 Round Mag to give players wiggle room during longer gunfights and the Slimline Pro optic for a clean sight.