One of the best ARs in MW2 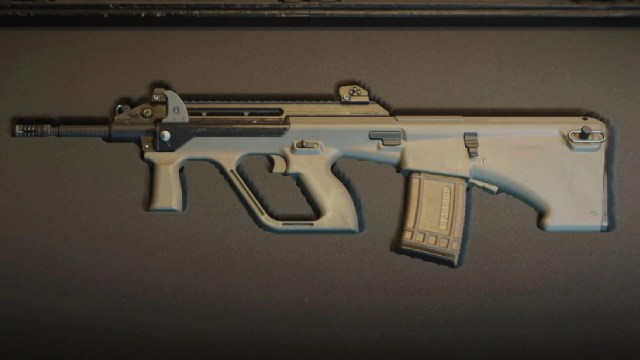 Provided by Activision The gun model for the STB 556 in Call of Duty: Modern Warfare 2.

The assault rifle class in Call of Duty: Modern Warfare 2 multiplayer contains a plethora of terrific weapons. From the M4 to the Kastov-74u, players can’t really go wrong when selecting one of the ARs (aside from the M16). Among the offering of ARs, one of the most underrated options is the STB 556, which is starting to be recognized for the beast of a gun that it is. The STB 556 is the AR version of the AUG, and it has a fantastic loadout in Modern Warfare 2.

There aren’t that many shortcomings when it comes to the STB 556. The AR has a terrific fire rate, damage range, and accuracy. It also has some of the cleanest iron sights in MW2, which allows players the freedom to not run an optic. This frees up an attachment slot that players can use to increase their recoil control, mobility, etc. However, for the STB 556’s recommended loadout, the attachments lean towards recoil control and stability.

To see the full loadout for the STB 556 in Modern Warfare 2, keep reading below.

Since the STB 556 is an assault rifle, players will want to keep their gunfights at medium-long range for the most part. Although, the STB does have solid mobility for an AR, so players can venture into closer gunfights if they wish. The loadout for the STB boosts mobility slightly so players can take on these gunfights more effectively, but mainly boosts accuracy.

The VLK LZR 7MW laser boosts ADS speed so players can compete at close range while the rest of the loadout focuses on accuracy and stability. Although, the 5.56 High Velocity ammunition increases target flinch, giving players a better chance in long-range gunfights.