A fast and accurate sniper rifle in MW2 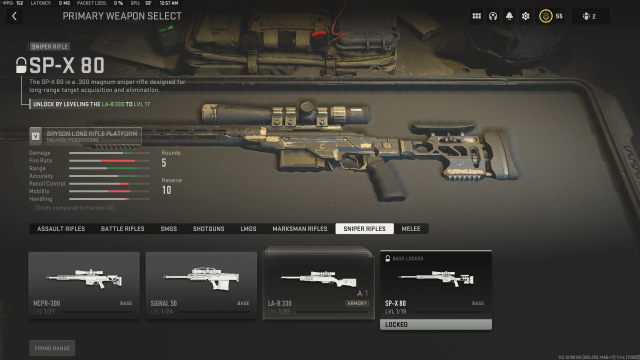 Provided by Activision The gun model for the SP-X 80 in Call of Duty: Modern Warfare 2.

If you’ve played any amount of Call of Duty: Modern Warfare 2 since its release, then you’ll likely know how powerful sniper rifles currently are.

Whether we’re talking about marksman rifles or traditional snipers, the point is the same. Snipers are incredibly strong out of the gate in MW2, proving to be a force that most players can harness effectively. The meta for snipers has been mixed thus far, but some players have opted to go with certain snipers over others. One sniper that’s in the running for the meta is the SP-X 80, which has an outstanding loadout in Modern Warfare 2.

Compared to its regular sniper counterparts, the SP-X 80 is a strong mix between speed and power. It doesn’t have the power of a sniper like the MCPR 300 but it also isn’t as quick as the LA-B 330. Instead, the SP-X shares strong qualities with both of those guns, featuring solid mobility and damage to make for a great sniper. Of course, players will need to equip a certain set of attachments to ensure they’re maximizing their success with the SP-X.

As the SP-X 80 is quicker than most snipers, players will be tempted to quick scope with it. The SP-X is great for quick scoping, but it will need some mobility boosts to keep up with the faster marksman rifles of MW2.

The 18.5″ Bryson LR Factor barrel, FSS OLE-V Laser, and Schlager Match Grip all provide an improvement to the SP-X’s aim down sights time, making it a much faster sniper. The Max DMR Precision stock also provides a boost to ADS, but also increases aiming stability as well so players have a better chance of hitting their quick scope shots. The Nilsound 90 muzzle is in place to increase the SP-X’s damage range for any longer range gunfights.