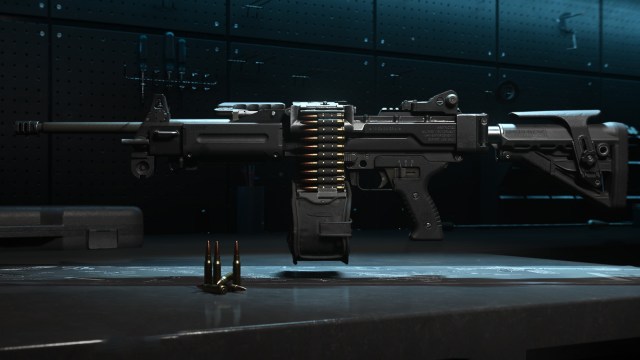 Provided by Activision The gun model for the Sakin MG38 in Call of Duty: Warzone 2.

The light machine guns in Call of Duty: Warzone 2 are quite powerful in Season 1, competing with assault rifles in every facet of the game. So far, the RPK is the most popular LMG, with the RAAL MG coming in behind it. The rest of the LMG class isn’t anywhere close to being used as much as those two guns, though players have opted for the HCR 56 if they were to choose a third option. However, players might be overlooking another strong LMG. The Sakin MG38 is extremely strong in Warzone 2, featuring a hard-hitting and accurate loadout.

The Sakin MG38 has been underrated in both Warzone 2 and Modern Warfare 2 so far. This is primarily because of the other LMGs in the game, but also because the Sakin MG38 isn’t a flashy weapon by any means. It’s a basic LMG that can do a little bit of everything. With the right attachments, though, the Sakin MG38 can be a player’s secret weapon on Al Mazrah.

To see the full loadout for the Sakin MG38 in Warzone 2, keep reading below.

Since the Sakin MG38 is a heavy light machine gun, we won’t spend much time trying to improve its mobility. Instead, we’ll stick with boosting its existing strengths, which include damage and recoil control.

The loadout starts with the Husher-65 Silencer and 20″ Bruen Silver Series Barrel, both of which boost damage range, recoil control, and bullet velocity. Those attachments are followed by the STIP-40 Grip which also increases recoil control. The Bruen Warrior Grip maximizes the Sakin’s recoil control while also improving hip-fire control for any close-range gunfights. Finally, the optic in place is the SZ SRO-7, which is a mid-range scope that’s perfect for picking off opponents at most ranges in Warzone 2.