An underrated sniping option in MW2 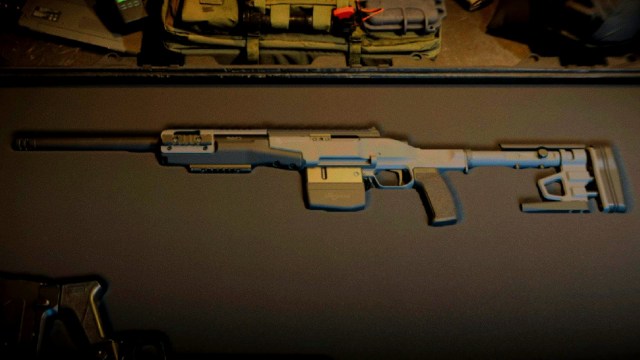 Provided by Activision The gun model for the SA-B 50 in Call of Duty: Modern Warfare 2.

The marksman rifle category has received a plethora of attention early on in Call of Duty: Modern Warfare 2 multiplayer.

This is mainly because of the sheer dominance of the SP-R 208, which is considered to be one of the most overpowered weapons in the game. As such, many players are expecting a nerf to come through for the SP-R in the coming days or weeks. Players will need a new marksman rifle to use. While there are plenty of options, we recommend the SA-B 50, which has a surprisingly strong loadout in Modern Warfare 2.

To unlock the SA-B 50, players need to use the SP-R 208 and rank it up to level 13. Once they do, they can equip the SA-B Receiver and start leveling it up in MW2. Compared to the SP-R, the SA-B has a larger magazine by default and is slightly more mobile. However, the SP-R has a better damage range profile, which is why it’s received so much attention thus far. Although, the SA-B isn’t too far behind. If players want to push the SA-B to its limit, they’ll need to equip its best set of attachments.

As with any marksman rifle, players are going to be focused on quick scoping with the SA-B. This means the loadout for the SA-B will feature more mobility attachments than anything.

Using this loadout, players will see an immediate improvement in the SA-B 50’s mobility. Almost every attachment is dedicated to improving either aim down sights speed or sprint-to-fire time. However, the optic in place will allow players to use the SA-B as a more traditional sniper so they can pick off enemies at longer ranges.