One of the best LMGs in MW2 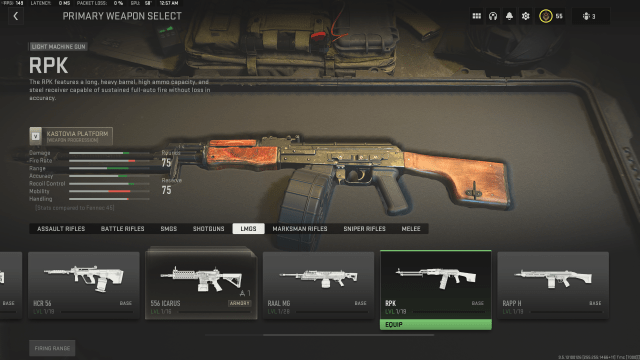 Provided by Activision The gun model for the RPK in Call of Duty: Modern Warfare 2.

A weapon class in Call of Duty: Modern Warfare 2 that’s starting to gain more attention in multiplayer is the light machine guns.

While players were mainly focused on assault rifles, submachine guns, and snipers early on in multiplayer, it’s time for the LMGs to have their time in the spotlight. The LMGs have had a light shined on them simply because players are predicting they will be dominant when Warzone 2 arrives on Nov. 16. The RAAL MG has received the most attention in Modern Warfare 2, but the RPK and its best loadout can match the RAAL step for step.

The RPK is unlocked in MW2 via the Kastovia Weapon Platform. Players must use the Kastov 762 and Kastov 545 before they can unlock the RPK in multiplayer. Once players accomplish this, they can begin using the RPK through its Receiver. Though the LMG will take some time to fully level up, it could be entirely worth the time when Warzone 2 comes out. The RPK has the potential to be a terrific Warzone 2 weapon, but, for now, players can focus on its multiplayer loadout.

As with any LMG, the RPK’s main weakness is its mobility. Luckily, with an attachment or two, we can increase that stat while also improving the RPK’s other stats, such as recoil control and damage range.

The TAC 596 Barrel kicks off this loadout by increasing mobility, damage range, and bullet velocity. However, this comes at a cost of some aim down sights, but that shouldn’t be a problem because players gain that loss back by using the Corio LAZ-44 V3 laser. The FSS Sharkin 90 improves aiming stability and the .762 High Velocity ammo further improves bullet velocity. This loadout could change by the time Warzone 2 comes out, but it’s the best the RPK has to offer for now.