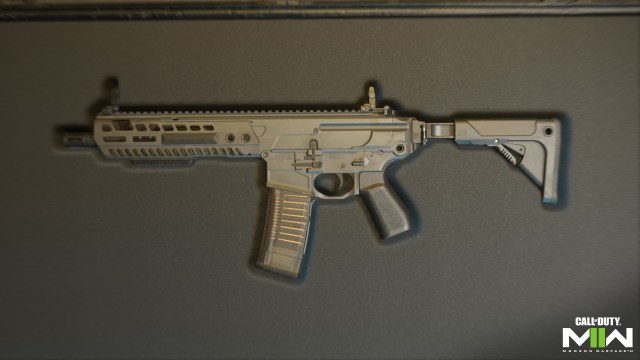 Provided by Activision The gun model for the M13B in Call of Duty: Modern Warfare 2.

Despite it not being on the Season 1 Battle Pass in Call of Duty: Modern Warfare 2, the M13B is a part of the season’s launch weapons. We’ve gone over how to unlock the M13B in a separate guide, but it essentially requires players to head into DMZ and kill a specific character. Then, players need to exfil with the M13B in hand. Once they do that, players can begin leveling up the M13B and eventually equip its best loadout in Modern Warfare 2.

The M13B is essentially the same weapon as the classic M13 from Modern Warfare 2019. It has roughly the same iron sights as that weapon and behaves almost identically. However, there are a few new mechanics with the new M13 that players should be aware of. For starters, the M13B seems to have more recoil than its predecessor and has slightly less damage. This can make the M13B difficult to use right out of the gate, but it has a set of attachments that can turn it into a terrific AR.

Best loadout for the M13B in Modern Warfare 2

The key stats were looking to increase with this M13B loadout are damage range and recoil control. With these two specific stats buffed, the M13B will be able to compete much better with other assault rifles in MW2.

To start, we have the 14″ Bruen Echelon barrel and the Echoless-80 muzzle. The former increases recoil control, bullet velocity, and damage range while the latter essentially does the same. This means the M13B is getting a significant boost to damage range and recoil control. Then, there are two more attachments to improve recoil in the FTAC Ripper 56 and D37 Grip. Finally, we have the Cronen Mini Pro as the optic of choice, but have added two other alternatives if players don’t have that specific sight unlocked.