A necessary evil in MW2 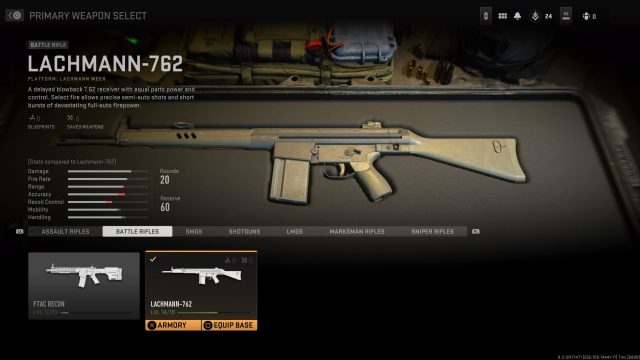 Provided by Activision The gun model for the Lachmann 762 in Call of Duty: Modern Warfare 2.

The new Gunsmith system in Call of Duty: Modern Warfare 2 means that players need to use weapons they otherwise never would have in order to unlock guns they actually want to use. The best example of this is players being forced to use the Lachmann 762 battle rifle to unlock both the Lachmann 556 and Lachmann Sub.

The battle rifle version of the Lachmann is frustrating to use, to say the least. However, if players throw on the right loadout for the Lachmann 762 in Modern Warfare 2, they might find it a bit easier to deal with.

While the Lachmann 762 isn’t a horrible gun by any means, it can be infuriating to use in a competitive multiplayer match. The gun fires extremely slowly and it has a vertical recoil that is difficult to manage. All of these negatives make the Lachmann 762 one of the harder weapons to use, especially on smaller maps where players can get killed in one second by a strong SMG or AR. However, with the right set of attachments, the Lachmann 762 can compete much better with those top-tier weapons.

Rounding things out is the 7.62 High Velocity ammunition, which allows players to kill enemies faster thanks to the added bullet velocity. Finally, the Cronen Mini Red Dot is a perfect optic for any rifle, as it gives players a clear sight without giving up any additional stats.