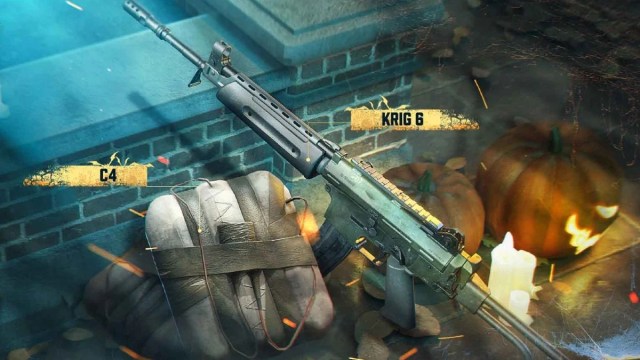 Provided by Activision The Krig 6 came with the Season 9 update of COD Mobile.

COD Mobile’s recent Season 9 update brought some Halloween-themed content into the game as well as a new weapon for players to unlock and use. The Krig 6, originally from Black Ops Cold War, is the newest weapon in COD Mobile. The assault rifle arrived along with the C4 equipment, both of which can be unlocked via the Season 9 Battle Pass. Once players have leveled up their Battle Pass enough to unlock the Krig 6, they can equip its best loadout in COD Mobile.

As Black Ops Cold War players know, the Krig 6 is a powerful AR with terrific stats across the board. It acts very similarly in COD Mobile, delivering great performance even with no attachments equipped on it. Of course, as players level the gun up, they’ll gain access to stronger attachments and gain the ability to truly dominate with the Krig. The lingering question is, what are the best attachments to make the Krig 6 a top weapon in COD Mobile?

To see the full loadout for the Krig 6 in COD Mobile Season 9, keep reading below.

A couple of these attachments will feel extremely familiar to players who used the Krig 6 in Black Ops Cold War. The Agency Suppressor and Field Agent Foregrip were a part of the Krig’s best loadout in Cold War, and they’re strong once again in COD Mobile. The Agency Suppressor boosts damage range and recoil control while keeping players off of the mini-map when firing. The Field Agent Foregrip drastically lowers recoil control. The rest of the loadout is fairly standard for a COD Mobile AR, increasing magazine size and mobility.

While the Krig 6 hasn’t been in the game for long, it’s already one of the stronger ARs players can equip in COD Mobile Season 9.