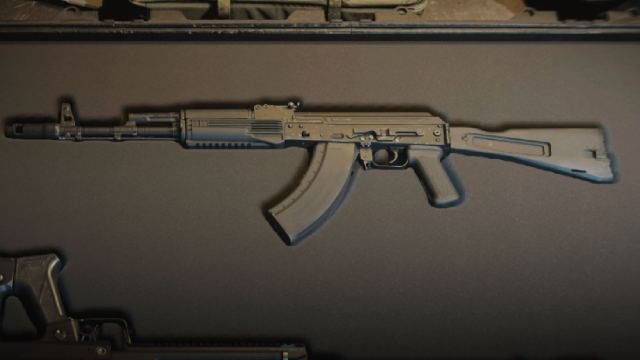 Provided by Activision The gun model for the Kastov-762 in Call of Duty: Modern Warfare 2.

Out of the gate in Call of Duty: Modern Warfare 2, there are several assault rifles that are considered at the top of their class. The primary meta AR right now is the Kastov-74u, which has a ridiculous time-to-kill and accuracy. However, guns like the TAQ-556, M4, and Kastov-762 aren’t far behind the 74u in terms of production. The Kastov-762 specifically has a tremendous stat base in Modern Warfare 2, which is only boosted by the gun’s strongest loadout.

The Kastov-762 is the closest weapon to the AK-47 that we have in MW2. It performs almost exactly the same and has the same iron sights. As players begin leveling up the Kastov-762, which is the first Kastov gun players will unlock, they’ll notice just how strong it is. However, after players rank the weapon up fully, they’ll see a whole new level of strength. Of course, that’s provided that players use the recommended loadout for the AR.

To see the full loadout for the Kastov-762 in Modern Warfare 2, keep reading below.

The best loadout for the Kastov-762 primarily focuses on recoil control, damage range, and bullet velocity. All of these stats will see an increase and make the Kastov-762 one of the best ARs in multiplayer.

With all of these attachments, players will mainly see a large uptick in their overall damage and range. Pair that with a significant boost in recoil control, and you can make the Kastov-762 an absolute laser beam — especially at longer ranges. Mobility is the one stat that’s decreased with this loadout, but as long as players use the Kastov-762 at medium-long range, that shouldn’t be much of an issue.