The only burst-fire weapon in Vanguard multiplayer 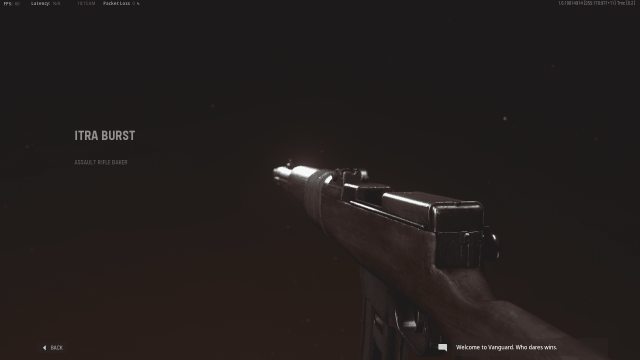 Provided by Activision The gun model for the ITRA Burst in Call of Duty: Vanguard.

Back in the era of World War II, there weren’t many burst-style weapons available to use in the heat of battle. Rather, there were fully-auto and semi-auto weapons that filled up the battlefield. However, Sledgehammer Games decided to include one of the only usable burst-fire weapons from the era in Call of Duty: Vanguard. The ITRA Burst is the only burst-fire weapon available in Vanguard multiplayer and comes with a fully-stacked loadout to boot.

Since the ITRA Burst is so unique from its assault rifle counterparts, players haven’t been using it too much after the release of Vanguard. This is also because the attachments available for the ITRA Burst are somewhat confusing. This article will clear up any confusion players may have and put the ITRA Burst’s top loadout on the map in Vanguard.

Seeing as the ITRA is a burst weapon, players can kill enemies extremely quickly, as long as they hit a majority of their burst. Even if players are deadly accurate, some accuracy-boosting attachments on the ITRA’s recommended loadout are still required. These attachments are paired with fire rate and mobility boosts to give the ITRA Burst an edge in all situations.

To get the most out of the ITRA Burst, players will want the Recoil Booster for extra fire rate. When paired with attachments like the Botti 300MM CXII and Lengthened Ammo Type, which boost bullet velocity, players will make the ITRA Burst kill even quicker. The Vital Proficiency also helps out with this, as it boosts the gun’s critical hit range.

The rest of the loadout is focused on mobility and recoil control. The Fabric Grip and Botti DII Grip increase ADS speed while the M1941 Handstop boosts recoil control and accuracy. There’s not a better loadout to help players dominate with the ITRA Burst in Vanguard.