Hitscan and versatility are highlighted on Push 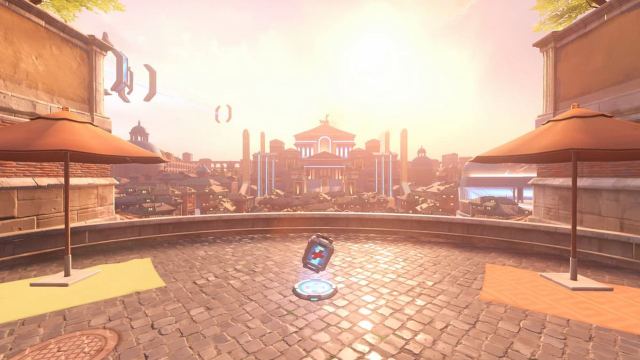 Provided by Activision-Blizzard. The mega health pack on the Push map Colosseo in Overwatch 2.

For players trying to figure out the new game mode Push in Overwatch 2, here are some of the best heroes to try out in both quick play and ranked.

Push replaces the Assault game mode, known to players as 2CP — the one with two control points. Now, Push revolves around guiding a robot a further distance than your opponent. While the two game modes are very different, you’d be surprised by how the two modes overlap with which heroes remain good on them.

The views in Portugal are beautiful this time of year. 📍

Push is a hitscan game mode

To start, much like how 2CP favored hitscan players, that remains the same in Push. While not an instant choice, hitscan such as Sojourn and Ashe are some of the best heroes for their role right now. The long sightlines and favorable high-ground positions put those hitscan into great positions. And, unless the enemy team runs a Winston, D.Va, or a dive DPS like Genji or Sombra, you’ll be pretty comfortable taking shots.

Playing both hitscan at the same time isn’t the best idea however, so it’s best to choose other powerful DPS heroes like Genji, Reaper or Sombra depending on what the enemy team is playing.

You can make (almost) any tank work on Push

Speaking of tanks, it’s fair to say that you can make any tank hero work right now in Overwatch 2. Some of the weaker ones are Reinhardt, Doomfist and Roadhog, due to easy counter-picks like Ana. Some of the best tank heroes in Overwatch 2 include Winston and D.Va, but Push allows for even more tanks to be viable.

Push has two paths the robot can go, so it’s very team dependent. If you are running rush or dive heroes like Lucio or Brigitte, tanks like Junker Queen, D.Va and Winston are best. However, if you’re playing a long-range comp with both hitscans, Orisa and Sigma are viable choices. They can both protect your team but also close distance and do significant damage if needed. Much like the hitscans you’d be playing with, you’ll need to land your javelins and rock throws on the right opponents to get the most value.

Supports match the rest of the team on Push

Last but not least, which healers are best on Push?

With long-range sightlines and plenty of chances for flanks, Ana seems like a must-pick but it does depend on which heroes your DPS and tank are on. Zenyatta both gets a lot of value from the range, but can also be dove easily. If your team has a Genji, choosing Ana will almost never be a bad choice simply due to the nano blade combo. But, as we’ve seen in the Overwatch League, if your tank is sticking to Junker Queen, Lucio and Brigitte will get your team into long close-range fights that you can probably stay alive for longer than your opponents.

Much like the other two roles, there aren’t a set of must-pick best heroes for supports in Overwatch 2’s new game mode Push. Part of being support is knowing what fits best for your team before you leave your spawn room door.

With Kiriko not out in competitive yet for Season 1, we have yet to see her true impact in the new game mode. When she arrives, this post will be updated with how Kiriko fits into Push. Looking into her kit, she looks useful in those long-range sightlines, possibly alongside Ana.