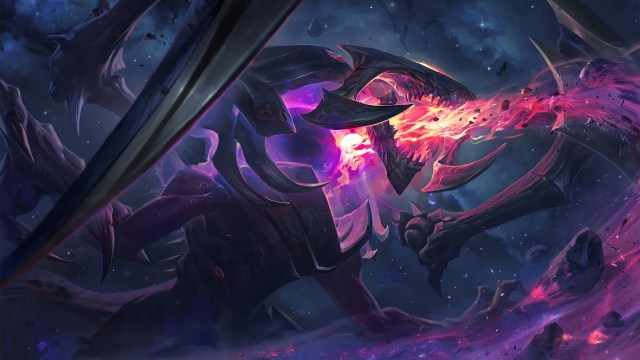 Provided by Riot Games On initial playtests, Cho'Gath has the arguable best Hero Augment in the game.

The new Hero Augment mechanic in the new Teamfight Tactics expansion, TFT: Monsters Attack! gives players the chance to make any unit in the game into a super carry or super support. But with Hero Augments selection changing each game, it’s important to know which units have the best ones so that when they show up, players know which ones to pick. Here is a list of the five best Hero Arguments from the five different unit costs in TFT Set 8.

Traumatic Memories: Gain a Fiddlesticks. When an ally dies, it gains 200 bonus health for the rest of combat.

It might take some time to optimally use Fiddlesticks since his unique trait, Corruption is unlike anything in the history of TFT. Since Fiddlesticks doesn’t do anything until either every ally unit dies or he drops below 60% health, figuring out the optimal way to position the unit is up for debate. There are two ways players can theoretically do it. Either position him on the front line and make him go active almost immediately or put him in the back and wait for everyone to die.

The latter is going to give Fiddlesticks the best carry potential since he will be at full health when he casts. But in both situations there is one thing that’s certain, players will wish they had more health on Fiddlesticks. But that’s where the carry Hero Augment comes in. Giving Fiddlesticks an extra 200 health every time an ally unit dies is massive considering that a backline Fiddlesticks will pretty much have a built-in Warmogs Armor when he casts.

Elastic Slingshot: Gain a Zac. Combat Start: He flings his two nearest allies to the enemy backline, knocking up enemies upon impact for three seconds.

With the removal of Assassins in TFT Set 8, there is very little inherent backline access. This isn’t a bad thing for the game but does make ranged units much better than they have been in previous sets. But what this also means is that if players can get onto the backline, they have an incredible advantage. Zac’s support Hero Augment gives the player that advantage.

Not only does he essentially make any two units on the board into Assassins, but the Hero Augment also acts as a start-of-round AoE CC in two different corners of the board. This pretty much eliminates two carry units every single round. At first glance, this is definitely among the strongest Hero Augments in the game.

Energy Void: Gain a Cho’Gath. Each time his Ability hits an enemy, he steals 20% of their Magic Resist.

To put it simply, this augment on Cho’Gath is disgusting. Since his ability already scales on magic resist, stealing enemy magic resist is insane. Since he steals magic resist, it makes the enemy units take more damage by shredding their defense but it also buffs Cho’Gath’s damage thanks to the magic resist scaling. At a glance, this gives Cho’Gath around a 40% damage boost but’s even more than that since if he hits a unit with a lot of magic resist, the ability will do a lot more damage to an enemy with low magic resist since it lasts the entire round and his Lazer hits in a cone. And that’s just in the damage department.

Vitality of the Ox: Gain a Fiora. When you field her, your team heals 2% of their maximum health when they attack.

Obviously, when you get to the two-cost and one-cost units, their Hero Augments are less flashy and impactful than the higher-cost ones. However, that doesn’t mean they can’t be just as useful. Fiora’s support Hero Augment is actually really good. Giving the entire team built-in omni-vamp is incredibly potent and especially so in Duelist comps since those units attack very quickly.

Kayle’s carry Hero Augment is the only one in the game that encourages players to reroll to get their hyper carry to three-star. As a Duelist, Kayle already has a high one-cost carry ceiling and with this Hero Augment, she is probably the best candidate. At one-star she has 30% attack speed. At two-star, she has two extra hexes of attack range and at three-star, she fires two additional bolts dealing 50% damage.

Essentially with this Augment, Kayle has a built-in Rapid Firecannon and a Runaan’s Hurricane which is absurd for a one-cost Hero Augment.