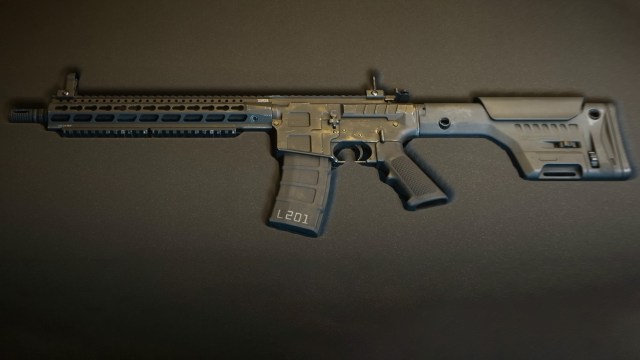 Provided by Activision The gun model for the FTAC Recon in Call of Duty: Modern Warfare 2.

In Call of Duty: Modern Warfare 2, there are some weapons that players are almost forced to use. The Lachmann 762, for example, is required to get to level 13 before players can unlock either the Lachmann 556 or the Lachmann Sub. This is the way the Gunsmith works in MW2, and it requires players to step out of their comfort zone in multiplayer. If players didn’t purchase the Vault Edition of MW2, then they’ll likely be stepping out of their comfort zone when they use the FTAC Recon. The FTAC Recon isn’t the best weapon in the world, but it at least has a decent loadout in Modern Warfare 2.

The FTAC Recon is a requirement to unlock the FSS Hurricane submachine gun in MW2. Vault Edition players won’t have to go through this process, but every other player will; that is, at least if they want to use the Hurricane. While it can be a pain to level up a gun you don’t want to use, you might as well throw on the FTAC Recon’s best set of attachments to make the process easier.

To see the full loadout for the FTAC Recon in Modern Warfare 2, keep reading below.

The main goal with this FTAC Recon loadout in MW2 is to increase its overall mobility. By default, the FTAC Recon has painfully slow mobility, making it difficult to kill any enemy that’s less than 30 meters away. The FSS OLE-V Laser, Ravage-8 stock, and XTEN Grip all boost the Recon’s mobility, mainly by improving aim down sights speed. The Bull Rider 16.5″ barrel in the loadout boosts the Recon’s damage range and bullet velocity so it can take enemies down more quickly.