The Fennec is back in MW2 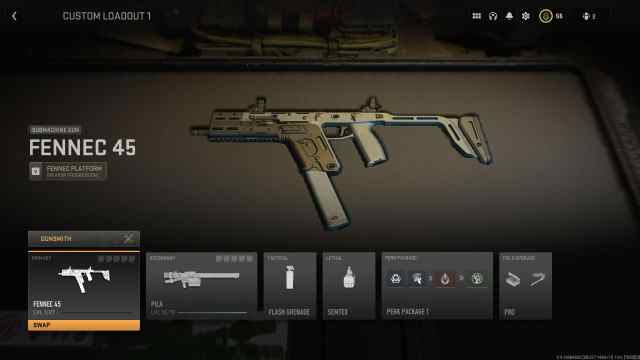 Provided by Activision The gun model for the Fennec 45 in Call of Duty: Modern Warfare 2.

There are some aspects of the Fennec that have remained the same in MW2, though. Most notably, the submachine gun still has a highly impressive fire rate, besting every other gun currently in multiplayer. Because of this high fire rate, it’s sometimes difficult to control the Fennec, especially at medium to long ranges. However, a loadout for the SMG exists that allows players to keep this high fire rate, increase mobility, and also boost accuracy so that the Fennec 45 can be a threat outside of close-range gunfights.

The Fennec requires at least one attachment to improve its recoil control as, without it, players won’t have any luck at medium to long range. However, the Fennec 45 is also still an SMG, so players will want to increase their mobility so they can keep up with the other SMGs in close quarters.

Arguably the most important attachment on this Fennec 45 loadout is the Fennec Mag 45. This gives players an extra 15 bullets in each magazine, which really make a difference considering how fast this SMG burns through a clip. The Bruen Cubic Comp muzzle reduces recoil while the rest of the loadout offers players extra mobility.