Arguably the best shotgun in multiplayer 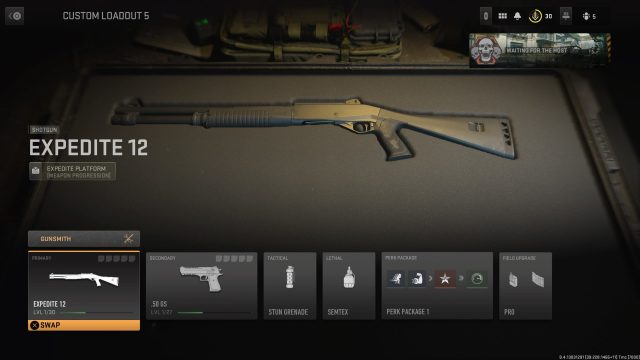 Provided by Activision The gun model for the Expedite 12 in Call of Duty: Modern Warfare 2.

The shotgun class in Call of Duty: Modern Warfare 2 is quite varied, as it features four different weapons that are easily distinguishable from each other. Luckily, there is no shotgun that’s as overpowered as the Model 1887 from the original MW2. However, if one of the current MW2 shotguns were to come close, it would likely be the Expedite 12. The Expedite 12 is a pump-action shotgun that can decimate enemies with the right loadout in Modern Warfare 2.

This shotgun has arguably the best damage range profile in its class, and has a decent fire rate to boot. Players might not feel that sentiment as they’re using the Expedite 12 in its early levels; it’s fairly weak in this stage without any of its key attachments. As players begin to level up the weapon, though, they’ll start to see just how powerful it can be in multiplayer. Eventually, players can equip its best set of attachments to feel the true power of this MW2 shotgun.

Players will want to focus on two different stats when building their Expedite 12 loadout. Those stats are damage range and mobility. Players want added damage range so they can more easily one-shot kill enemies and extra mobility will allow players to run faster and shoot the shotgun quicker.

For this loadout, the XTEN Modified Choke and the 18.5″ Emperor Barrel take care of any damage range concerns players might have had. Then, the 1mw Quick Fire Laser and Merc Foregrip help with hip-fire accuracy and mobility. While players will need to aim down sights at times, hip-firing is still the best way to use a shotgun, so extra hip-fire accuracy will help players immensely. Finally, the Expedite L-Bolt adds some much-needed fire rate to the Expedite 12 to truly round out this loadout.