A strong loadout for an underrated weapon 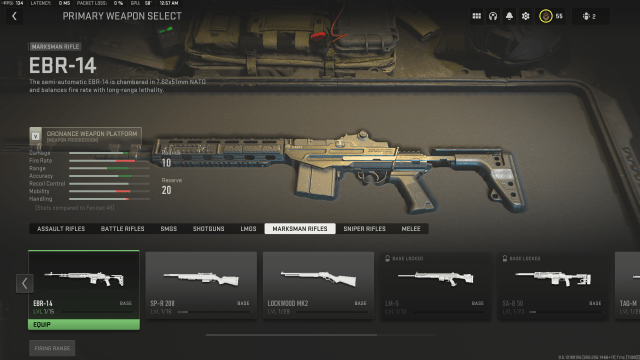 Provided by Activision The gun model for the EBR-14 in Call of Duty: Modern Warfare 2.

One of the most popular weapon classes in Call of Duty: Modern Warfare 2 one week after its launch has been the marksman rifles.

While this is primarily due to the sheer power of guns like the SP-R 208 and Lockwood MK2, the entire class is extremely powerful. There are many players who don’t know about the class as a whole, though. Once the SP-R eventually gets knocked down a peg with a nerf, players might be running to the other marksman rifles. This includes the likes of the EBR-14, for starters, which has a surprisingly decent loadout in Modern Warfare 2.

While players could wait for an SP-R nerf to use the EBR-14, it should also be noted that the release of Warzone 2 could make the gun much more popular. The EBR has the capability to be a meta weapon in Warzone 2, much like the DMR 14 was when Black Ops Cold War was integrated into Warzone. Regardless of those possibilities, if players are simply using the EBR-14 in MW2 for the camo grind or exploratory reasons, they’ll want to use its best set of attachments.

In order for the EBR to compete with its marksman rifle counterparts, it will need some extra mobility. This will make the EBR faster and allow players to snap onto enemies at close-medium range much easier. However, we will also want to boost the EBR’s damage range for those more common long-range encounters.

The loadout begins with the Polarfire-S muzzle to boost bullet velocity and damage range while the 22″ Boremaster Barrel also boosts bullet velocity as well as accuracy. However, this comes at a cost of ADS speed. We can make that up with the SO R55 Adapator stock and FSS Gen.7 Grip, though. Players will be able to move quicker, aim faster, and be able to kill enemies much more efficiently with this EBR-14 loadout.