The best DMR-14 loadout in Call of Duty: Warzone Season 6

The best DMR-14 loadout in Call of Duty: Warzone Season 6

Still a reliable option in Season 6 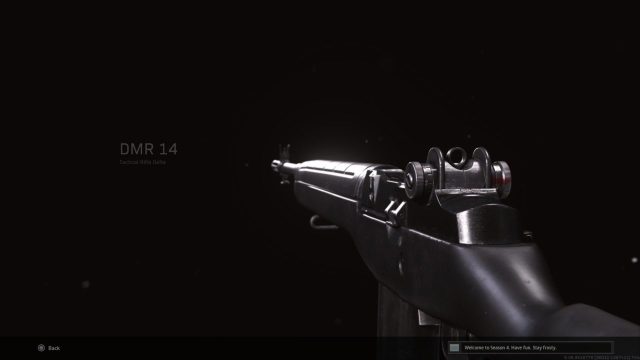 Provided by Activision The gun model for the DMR-14 in Warzone.

Once upon a time, the DMR-14 was the most famous weapon in Call of Duty: Warzone. When Black Ops Cold War was integrated with the battle royale in late 2020, the developers seemingly forgot to balance the DMR. It was the strongest gun to ever enter Verdansk and prompted fans everywhere to create a loadout for it. While the DMR-14 isn’t nearly as dominant in Warzone Season 6, its loadout still serves a purpose.

The biggest reason the DMR became so popular with players is due to its single-shot nature. This firing mechanic allowed the tactical rifle to become a mini-sniper and take fully-armored enemies down with a few shots. In one of the first nerfs to the DMR, Raven Software targeted this area specifically. To compensate for this months later, players can utilize the DMR-14’s newest recommended loadout in Warzone.

The latest round of weapon balancing was actually kind to the DMR-14. In Season 5 Reloaded, Raven Software decided to ease up on the rifle a bit by reducing its recoil. While not a huge change, it’s enough to warrant players adding it back to their list of loadouts in Warzone. When players are doing this, they can use the DMR’s recommended loadout for Season 6.

While the DMR’s recoil was buffed, players are still advised to use the Field Agent Grip. This will make the DMR’s recoil virtually zero and allow players to snap onto enemies anywhere on the map. The next attachment is the Rapid Fire, which increases the rifle’s fire rate, while having no negatives associated with it. The Agency Silencer provides the damage range and suppressed fire as well.

Lastly, the Axial Arms 3x scope is the best mid-range option and the 30 Rnd is a perfect way to get more bullets in the magazine. This DMR-14 loadout in Warzone should serve players well in Season 6.