The updated loadout for the BP50 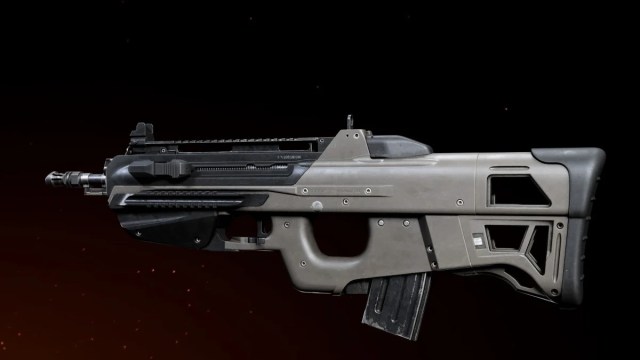 Provided by Activision` The gun model for the BP50 in Call of Duty: Warzone.

The BP50 was one of the last weapons added to Call of Duty: Warzone, giving fans a chance to use the popular F2000 from the original Modern Warfare 2 (2009). The BP50 didn’t make waves initially, as it was simply seen as a decently-fast assault rifle that was outclassed by other weapons. However, content creators have been tinkering with the loadout for the BP50 over the last few weeks, and it’s now a top option in Warzone.

Well, we should say it’s a top option on the smaller maps of Fortune’s Keep and Rebirth Island. While players are free to use the BP50 on Caldera, they’ll likely be outmatched at range by other assault rifles. On the smaller maps, though, players can take full advantage of the BP50’s fast fire rate and high mobility.

The most up-to-date loadout for the BP50 comes from content creator and Nuke Squad member FaZe Booya. FaZe Booya claims the BP50 is highly underrated, especially with the loadout they’ve designed for it.

To see FaZe Booya’s loadout for the BP50 in Warzone Season 5, keep reading below.

As players can see from the loadout, FaZe Booya has primarily focused on increasing the BP50’s recoil control and overall handling. This is evident from the multitude of attachments that improve the AR’s accuracy, such as the Leroy Custom, Hatched and Tight Grip, and MX Silencer.

However, mobility has been slightly boosted with the Charlier CR Laser, giving players a chance to hip-fire against enemies. Finally, FaZe Booya has increased the BP50’s magazine size to 60, which is detrimental to mobility but makes the AR lethal in long-range gunfights that require more bullets.