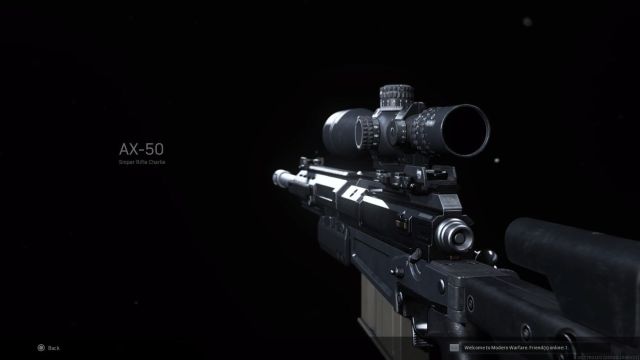 Provided by Activision The gun model for the AX-50 in Call of Duty: Warzone.

The AX-50 is one of the most popular sniper rifles in Call of Duty: Warzone, and has been since the game initially launched in 2020.

The sniper was a part of the core Modern Warfare weaponry that was launched with Warzone. While other snipers have been stronger and more popular at times, the AX-50 has always been a top option in the battle royale. With Modern Warfare 2 coming out soon and the AX-50 confirmed to be included in multiplayer, fans have wanted to get reacquainted with the sniper again. There’s no better way to do that than by using the AX-50 and its best loadout in the current version of Warzone.

Unlike some of the other snipers in Warzone — like the HDR and Gorenko Anti-Tank Rifle — the AX-50 is more of a close-medium range option. While it can certainly excel at long-range, it doesn’t have the one-shot kill capabilities of other snipers. Instead, players can use it to quickly scope in on enemies and deal significant damage in the blink of an eye. Of course, to make that process easier, there are a set of recommended attachments players can use on the AX-50.

To see the full loadout for the AX-50 in Warzone Season 5, keep reading below.

For starters, the Monolithic Suppressor is a common sight for any Warzone loadout. It lowers recoil and keeps players off the radar when firing. Next, the 32.0″ Factory Barrel is the best choice in this slot thanks to its increases to damage range, bullet velocity, and recoil.

The Tac Laser might be an odd choice for a sniper but it increases ADS speed, as well as aiming stability and steadiness when walking. This is helpful for both close and long-range gunfights. Rounding out the class is the Variable Zoom Scope and 7 Round Mags; both of which are standard for a sniper.