An old favorite that players might want to refamiliarize themselves with 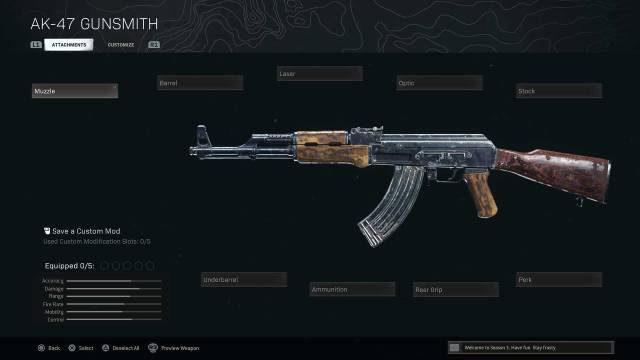 Provided by Activision The gun model for the AK-47 in Call of Duty: Warzone.

The AK-47 is arguably the most common weapon in the entire Call of Duty franchise, appearing in some capacity in nearly every title since the original Modern Warfare in 2008. As veteran players know, the AK-47 is so common that it has two variants in Call of Duty: Warzone, one from Modern Warfare 2019 and one from Black Ops Cold War. Today, we’ll be focusing on the MW version, as players might want to familiarize themselves with this AK-47 loadout in Warzone with Modern Warfare 2 releasing soon.

As confirmed by the official weapons list of MW2 and the early access Campaign, the AK-47 will return in the game as well as in Warzone 2. While it won’t go by the name “AK-47,” it will look and feel extremely similar to the AKs of the past. However, there are a large number of players who have not used the MW AK-47 in Warzone for some time. If players want to change that, they can use the AK-47’s best loadout in Warzone.

To see the full loadout for the MW AK-47 in Warzone Season 5, keep reading below.

The MW AK-47 hasn’t been as popular as its counterpart from Cold War. This mainly stems from the fact that the Cold War AK-47 is much more powerful. There are also better assault rifle options throughout Modern Warfare. However, if players truly want to prepare for Warzone 2, there’s no better way than to throw on the modern AK-47 again.

It’s difficult to get more basic than this for a Warzone loadout, but these are the best attachments for the AK-47. The damage range is increased, recoil control is kept down, and players see an increase in mobility and magazine size.