It wouldn't be an Overwatch League playoff without a new meta 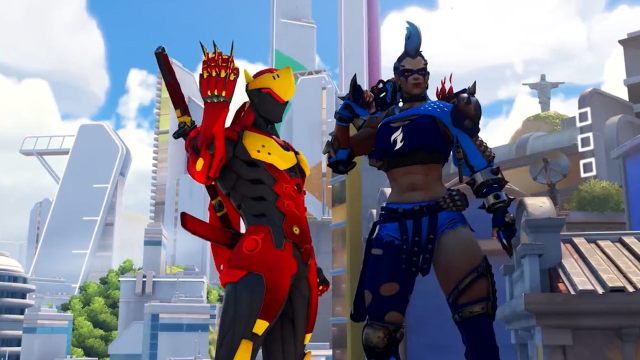 Looking back at every season playoffs, let’s go through what has changed for the playoffs and how the winners made it work.

The inaugural season has the biggest upset victor

Out of every Overwatch League season, the meta shift for playoffs wasn’t very significant for the first. A season that mainly had a consistent meta of Winston, D.Va, Genji, Tracer, Zenyatta, and Mercy was very entertaining. There were some hero variations based on maps, but that dive comp was consistent throughout the 2018 season. Teams like the New York Excelsior, Los Angeles Valiant and Boston Uprising were the best at that composition.

However, when the playoffs came along, a new tank duo was starting to grow in popularity. Primarily Orisa and Roadhog were starting to get playtime, especially on maps like Junkertown. Zenyatta started to fade out of the meta, affecting teams like the New York Excelsior more than others. The team that ended up learning the meta quickly and playing it the strongest ended up being the fifth place team. The London Spitfire, asides from a Stage 1 title, were struggling all season long. It wasn’t until a significant meta change that allowed their star players of Hong “Gesture” Jae-hee and Park “Profit” Joon-yeong to perform at their best.

The 2019 season went from GOATs to a needed playoff change

If there is one thing that the 2019 season was known for, it was a meta that stretched for way longer than it should’ve. The introduction of support hero Brigitte led to a meta where three tanks and three supports were the best choices. Thanks to their experience in it from Korean Contenders, rookie team Vancouver Titans were easily one of the best teams in the league. A newly improved San Francisco Shock were their only true competitor. The New York Excelsior remained competitive, alongside another rookie team Hangzhou Spark.

Yet, when the playoffs came to fruition, the changes to GOATs put a new hero into the forefront: Doomfist. His ability to one-shot enemies and combo his ultimate with Zarya’s made him a great choice. In general, there were a bunch of picks that surprised fans, from Baptiste to Bastion. The coaching of the San Francisco Shock led the team to adapt to this new meta and win it all.

2020 was an ever-changing year due to the pandemic

It’s hard to point to this meta change with much disdain, as the league itself had to change a lot partway through. After originally planning to do homestands across the world, the COVID-19 pandemic forced the league to change to entirely online play. As for the meta, there were some weird shifts throughout the season with hero bans getting introduced into the league.

After starting with Mei/Reinhardt rush, there was a sudden shift into a Genji meta in the Summer Showdown. The season ended, and all heroes were available. Yet again, teams had to learn what was the best out of all heroes.

And once more, the coaching of the San Francisco Shock led them to success. Roadhog ended up as a crucial pick in these playoffs, with Hyo-bin “ChoiHyoBin” Choi in that role. Alongside that, Kwon “Striker” Nam-joo helped lead the Shock to a back-to-back championship.

Hero bans returned in 2021, but to another playoff meta shift

When hero bans returned for the 2021 season, fans knew that this would mean that meta shifts would be common. While nowhere near as frequent as the 2020 season, 2021 had two out of four stages with hero bans. As it turns out, the final stage before the season playoffs would have hero bans, confirming that the playoffs would be much different than the regular season. The Dallas Fuel and Shanghai Dragons pulled forward as the best teams in the league, with teams like the Chengdu Hunters and Los Angeles Gladiators in the mix.

This time around, it was the Shanghai Dragons’ time in the light. After developing their team since their winless 0-40 inaugural season, they became a powerful team in both talent and coaching. Out of all the heroes available, Sombra and Widowmaker were crucial to success, and the Dragons had the best player on both heroes that season. Lee “LIP” Jae-won put together an amazing playoff run and won Grand Finals MVP.

How Kiriko might make the 2022 playoffs another big meta shift

The removal of hero bans and integration of Overwatch 2 was a big shift. Adjusting teams from 6v6 to 5v5 meant some teams improved and others got worse. Each stage in 2022 has brought a new meta, from small changes to larger ones thanks to new heroes getting introduced. Yet, after a good Countdown Cup meta with Genji, Zarya and Sombra, the developers confirmed that the playoffs would be on a new patch. Not only that, but new hero Kiriko and new map Esperança would be available for all teams to compete with.

Now, looking at what’s common at the top ranks online, Kiriko is powerful enough to be common but not an instant pick as Junker Queen was. If you were to compare this to any other post-season, this looks similar to the inaugural season. Yes, certain heroes will be changed, but the final stage in the league is a good measuring stick. However, on specific maps, Kiriko will make a difference.

We’ll have to wait and see which support players end up showing out in the Kiriko meta and lead their Overwatch League team to victories in the playoffs.