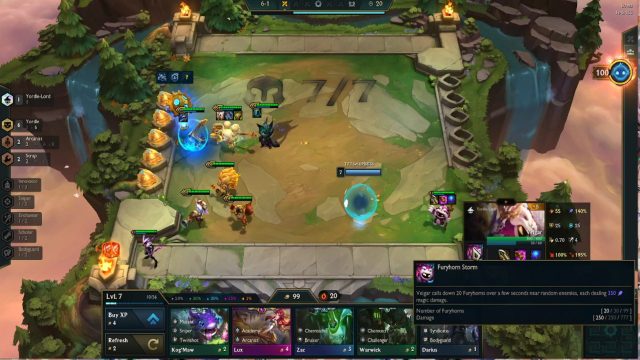 Provided by Riot Games Viegar brings his own trait to the game as the Yordle-Lord. But players can't roll for him. He can only be acquired through the Yordles trait

Teamfight Tactics: Gizmos & Gadgets hits the Public Beta Environment on Tuesday, bringing innovative new mechanics, units and traits to Riot Games auto battler. The new traits for TFT Set 6, in particular, scrap together some of the ideas players have been wanting while also bringing back a small-time trait from Set 1, with a twist.

While there are the typical front line traits, returning traits (like Assassins) and of course a new economy focused one, there are plenty of new ones. Some, like Cuddly, Glutton, Transformer, Sister, Socialite and Colossus belong to a single or limited number of champions, offering a powerful boosts to a composition. However, here is a deeper look at some of the most fun new traits coming in TFT: G&G.

Scrap is one of the big vertical TFT Set 6 traits. For players that have ever wanted a trait that makes use of random components, this is it. When active, loose item components on scrap units will turn into a random completed item that contains the equipped component at the start of each fight. However, the number of components that turn into full items depends on how many units are in at a time. With two scrap units in, one component on one scrap unit will transform. But if players get to six scrap units, then all scrap units that have a component will get a full item.

This means it is possible to turn six random components into six random completed items, and the sheer value makes this trait exciting. On top of that, each unit that has a competent will also be granted a shield as well.

If a Scrap player knows they will want to turn their sword into a completed item, slamming it on a champion like Ezreal is fantastic as even if you don’t get that completed item, the sword will always turn into a random sword item anyways.

Innovators call forth their inventions

Just like the two previous sets before Gadgets and Gizmos, the “summon a big thing” fantasy exists in TFT Set 6. This time its a little different, though. The Innovator trait gives players a mechanical companion they can freely move around before each round. This functions similarly to Azir’s soldiers from TFT: Fates. The mechanical companion will walk up and attack enemies like a normal unit, but the fun part comes with what kind of companions show up.

In this trait, the different intervals determine what companion will join the fight. If players have three innovators on the board, they will get to use a Mechanical Scarab. If players hit the five Innovator threshold, that Scarab will become a Bear. And if players can get all six Innovators and have access to an Innovator emblem or heart, they will summon a Mechanical Dragon that pretty much acts like the Dragons from the PvE round near the end of a game.

Yordles literally come out of nowhere

Now, the first thing that comes to mind when TFT players see the Yordle trait is the dodge mechanic. But this time Yordles don’t that, innately (though there is an augment that gives them the Set 1 throwback). Instead, Yordles will function primarily as the “hyper roll” trait of Set 6.

Yordle in Set 6 states that if a player has three of them on the board, at the start of the planning phase of each round, they gain a random, permanent Yordle on their bench. This functions doubly as an easier way to three-star Yordles and as free gold if players elect to sell the Yordles. Also, at six Yordles, all Yordles get a 20% spell cost reduction.

One thing to note, though, is that if a player three-stars a Yordle, that Yordle cannot show up as the once-per-round freebie. But what happens if a player has all the Yordles three-star?

When a player has all six Yordles three-stared, at the beginning of the next planning phase, a five-cost Viegar pops out wearing his adorable, Furryhorn skin. Viegar acts as a regular unit, and players can put items on him or place him anywhere on the board. His spell is very unique, too. When Viegar casts, he summons dozens of Furryhorns onto the map that do AoE magic damage.

Players can check even more traits out when TFT: G&G hits the live servers during Patch 11.22.