Deisik took down of 64 of the worlds best players to become the Innovator Supreme. 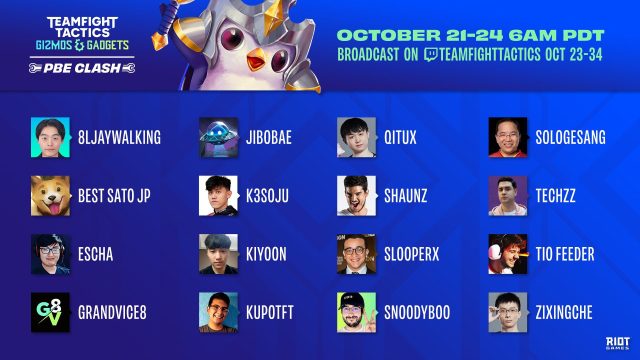 Riot Games didn’t mess around when it came to kicking off the competitive season for TFT set 6. The Teamfight Tactics: Gizmos and Gadgets PBE Clash, which started Oct. 21, brought together 64 of the best players from around the world. Those players competed in a four-day event in which the victor was crowned “Innovator Supreme.” The event also showcased some early gameplay of TFT’s sixth expansion. TFT: G&G will be hitting the live servers in just over a week. The set is playable now on the Public Beta Environment which was where this tournament was held.

Russia’s very own “Deisik” climbed through the play-in stage to reach the top eight finals where he outlasted players from various regions to take home the first-place cash prize and that Innovator supreme title. Here are the lessons we learned from that event.

Just like in every single other esport, the idea of national pride which comes from rooting for players in your own region is a fantastic way to get players and fans engaged in the action. The PBE Clash did just that. With players from every region accounted for, spectators got to see all of their favorite pros compete against the world, which is normally reserved for the World championship.

International tournaments outside of Worlds have happened before in TFT, but are very rare. Official ones are even rarer. But TFT Set 6 started off on the right foot with its first official tournament of the season as one in which every region was welcome to attend.

The 64 player, four-day event saw the regions of China, South Korea, Latin America, Brazil, North America, Japan, and Europe represented. Although EU came out on top, NA, BR, CN, and JP were all in the finals.  This made the tournament a big win for each region. Hopefully, the success leads to more international clashes throughout the season.

Its way too early to put thought into the best region

TFT Set 6 hasn’t even officially come out yet, but with the PBE Clash being an international affair, many may look at the event as a way to determine regional strength heading into the new season. Although the tournament format was good and had players putting on consistent displays of skill, there is no way or reason to put much weight on this event when deciding if a region is good or not.

The current state of the game has a lot of issues surrounding it that will need to be cleaned up before its official release. The tournament was designed to give spectators a look at what the early metagame could be ahead of the Patch 11.23 release date. But with such little time and preparation, it’s unreasonable to expect the same results later in the season.

But with that said, Deisik should have eyes on him as an early Worlds favorite

After a long and arduous battle, @Deis1k has proven to be the ultimate inventor and is crowned Innovator Supreme! 🔧

GG to all who played and thank you to all who tuned in! See you next time for more TFT fun. 👀 pic.twitter.com/jAMvuZrsFQ

Even though players and regions had a little under a week with the new set on the PBE, the quick adaptation skills that the top performers had should not go unrecognized. Deisik, who had to play through the play-ins since he wasn’t one of the 16 players automatically invited, tore up the play-in stage on Day 1. In the round of 64, He topped his lobby with a 21 point total after the three-game series. In the round of 32, he found himself again at the top of the lobby. He scored another 21 points as he easily qualified for the main event.

During the Day 3 group stage, Deisik struggled a little bit.  However, he did well enough to move onto the top 16. But it was there that Deisik, against the game’s best, flourished once again. In the three-game set, Deisik fired off three top fours in a row. The results netted him the second seed entering the top eight finals.

On Day 4, Deisik showcased his consistency and mastery of the early metagame. He placed top four in four of the five-game series. He also won two of those games as well. Going all the way from play-ins into the finals, Deisik did enough to win the event.

Deisik has historically been a top-level player. He has played at the last two EU TFT Regionals. If he can keep it together as the season gets underway, he will be representing EU at the TFT Gizmos and Gadgets World Championship next year.