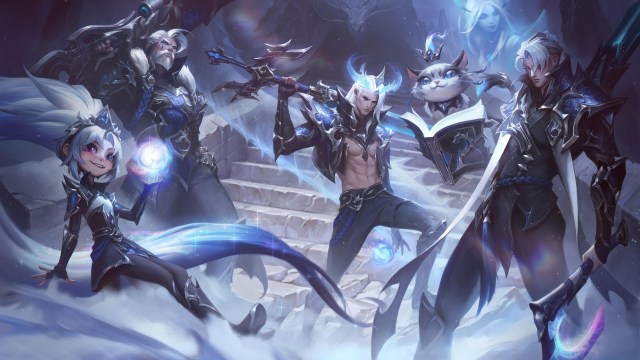 Provided by Riot Games Mystic Graves is seeing a higher priority according to data sites.

With the new Teamfight Tactics expansion on the horizon, it’s almost time to say goodbye to TFT Dragonlands. However, there are still two more patches to go before we move on to TFT Set 8. With the expansion very much on the home stretch, this last month is the perfect time to climb the ladder to secure ranked rewards.

By combining information from data websites like MetaTFT.com and expert analysis, we have developed a tier list that not only shows players what the best comps are but also why.

Here is the TFT Patch 12.21 Day One meta for TFT 7.5: Dragonlands Uncharted Realms.

With the patch being very small, Dragons are still on top and will continue to be probably for the rest of the set. The plan here is still simple: utilize the potent combo of Shyvana and Ao Shin to take down entire teams through their AoE magic damage while using your tank frontline of choice to withstand enemy pressure. As always, Ao Shin can be substituted for Aurelion Sol and Terra is a fantastic item holder.

Just like in the last few patches, the Tier-four Dragon duo of Sy’fen and Shi Oh Yu are still good enough to play in the current metagame. Of course, this comp isn’t nearly as much of a high roll as the Dragons comp but that’s why its strong. Only one or two players in a lobby can hit the jackpot but for everyone else, securing top four is the most important thing.

For players failing to pivot to the Dragons comp, this one is sufficient as it still plays two very strong dragons but also has secondary carry potential with Jayce and Pantheon.

Always hiding in the shadows is the Scalescorn composition. Initially designed to be the Dragon counter, Scalescorn has struggled to find it’s place in the metagame. Either its too strong and beats everything or it’s not even meta-viable.

Despite no changes to the units involved, players are starting to see results with the comp once again, mainly thanks to the comp going full reroll with the addition of Yone as a secondary carry.

The blandest and most boring comp of the expansion still gets the job done. Guild Xayah continues to be a meta threat with her being one of the best ramping units in the entire set and having a ridiculously good supporting cast that buys her time to do so. Alongside Shyvana as the late-game game-ender, this comp is still a fantastic option for players wanting to grab top fours and even win lobbies.

And then we have Mystic Graves. As one of the more interesting comps that have popped into the metagame as of late, Graves and friends has proven to be good enough to even stand up against the Dragon comps. With Graves being insanely tanky and the Mystic package letting him survive the powerful Dragon spells, the comp definitely has the tools to compete.