The rebuild comes after a disappointing exit from the PGL Major Challengers stage. 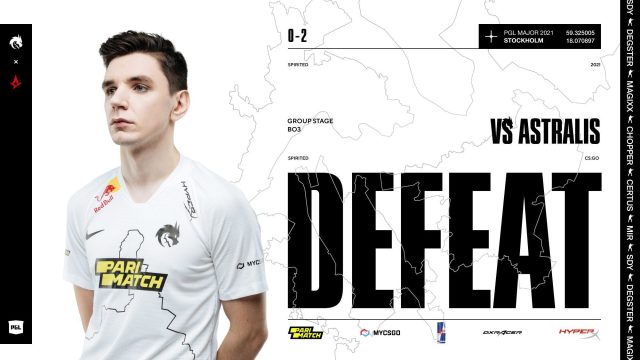 Team Spirit will enter a rebuilding phase for their Counter-Strike: Global Offensive roster after DreamHack Open November, according to a statement from CEO Nikita Cheshir Chukalin released on Sunday via the team’s Twitter.

“Right now we are entering a rebuilding phase, and I will make sure we put all our experience into forming and managing the new roster,” Chukalin said. “I am confident that our approach will help Team Spirit achieve the highest objectives.”

The core of Spirit’s roster — Viktor “somedieyoung” Orudzhev, Leonid “chopper” Vishnyakov, Nikolay “mir” Bityukov and Boris “magixx” Vorobyev — has been with the team for two and a half years. Spirit brought in Abdulkhalik “degster” Gasanov on a loan from iDISBALANCE to round out the roster.

Presumably, the roster will be put on the market for other teams to acquire during the post-major roster shuffles. It is currently unknown which players the Russian team will target in rebuilding their CS:GO roster.

Changes to the roster were likely spurred by Spirit’s disappointing results at the PGL Major. The team was eliminated in the Challenger stage. They started the tournament with a best of one loss to FaZe Clan before rallying with wins against GODSENT and TYLOO. Two bo3 losses against Virtus.pro and Astralis, however, sent them out of the tournament.

The failures of the CS:GO team comes in contrast to Spirit’s run at The International, the biggest Dota 2 tournament of the year. The Russian team won the whole event, securing $18,208,300 USD in prize money. The team was even congratulated by Russian president Vladimir Putin after the conclusion of the tournament.

Spirit’s last event as a team will be DreamHack Open November, which begins Nov. 10. It is a European online event with a $100,000 USD prize pool. The winning team will also instantly secure a spot in the ESL Pro League Season 15 Conference stage.