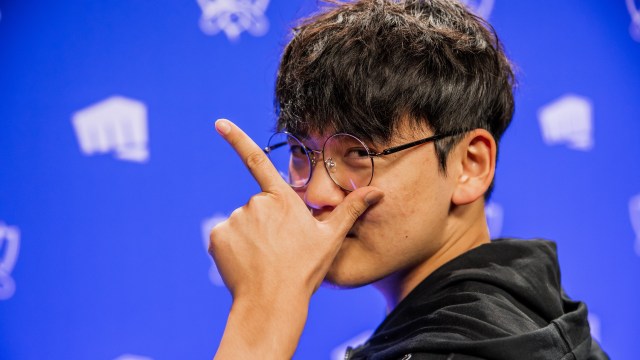 Provided by Riot Games/Getty Images/Colin Young-Wolff Gumayusi is all smiles after T1 finished the group stage 5-1 and with the first seed in Group A.

After T1 made history in the spring of 2022 by pulling off the first perfect season in League of Legends Champions Korea history, their bot laner Lee “Gumayusi” Min-hyeong wrote in the Players Tribune “I always believed in myself” and that “anything I set my mind to, I can accomplish”. However, that was before the 2022 Mid-Season Invitational; there, Korea’s most confident player saw his confidence shattered at the hands of Royal Never Give Up. Even with the hometown Busan crowd behind T1, even after an undefeated LCK spring split, they were not good enough to win on the international stage — Gumayusi alone was not good enough. Although T1 still qualified to Worlds 2022, Gumayusi had a down split; he blamed it on being in the wrong headspace.

“My biggest flaw is that sometimes I can’t control my emotions,” Gumayusi said. “When I’m not feeling at my best my performance is affected.”

In the spring split, Gumayusi was heralded as the best bot laner in the world alongside his MVP support Ryu “Keria” Min-seok. But in the summer, Gumayusi didn’t even make it onto any of the three all-LCK teams. T1 didn’t defend their title as LCK champions either. It has been a battle for Gumayusi to regain his confidence but so far at Worlds 2022, he has found solace.

"happy birthday keria ur bday present is our slot to quarterfinals"

“How I feel about the game — and my attitude towards it — has changed a lot,” Gumayusi said. “My team has improved together, which is helping me perform better myself.”

Outside of a lone loss to Fnatic in the group stage, T1 has looked unstoppable; they move on to the knockout stage as Group A’s first seed. Gumayusi’s performance is a big reason why. According to Oracleselixer.com, Gumayusi has the most kills and best KDA in his group and even when looking outside of it he still has a top-five KDA among all players with double everyone’s games. When asked what drives him to be better, he said that he doesn’t have any rivals, but that his teammates give him motivation. But what his teammates can’t give him is help with his emotions.

“I don’t share my feelings with others that much,” Gumayusi said.

As Gumayusi gears up for the knockout stage, he reflected on the group stage; he said he learned a lot from their games against EDG and their bot laner Park “Viper” Do-hyeon. Taking down the defending world champions twice has been good for Gumayusi’s state of mind; but it ultimately seems T1 can only go as far as Gumayusi’s emotions take them. But in the present, he is excited for the quarterfinals and has someone in particular that he wants to face.

“I think [Yu “JackeyLove” Wen-Bo] from Top Esports is a strong player, It would be fun to face him.”