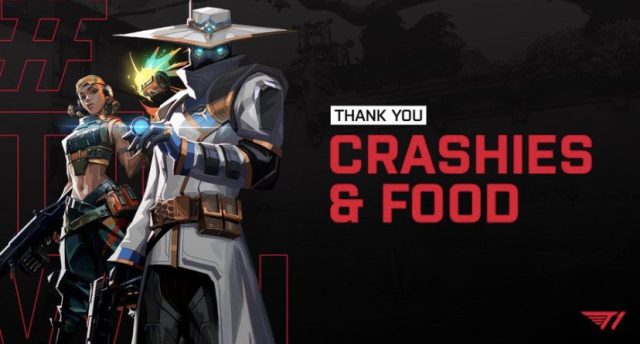 T1 Esports has officially released both Austin “crashies” Roberts and Victor “food” Wong from their North American Valorant roster. This sudden roster movement comes as a shock to those who have been fans of T1 since the beginning. Many roster changes have revolved around Tyler “Skadoodle” Latham who was benched by T1 before the Pop Flash invitational. Leaked messages between teammates showed some frustration with the way Skadoodle played the game.

Skadoodle released a statement via Twitter on the situation surrounding his benching. He seemed to be optimistic in his return to the squad, while many fans predicted another team would pick him up. Now with T1’s removal of crashies and food, it appears that Skadoodle may return to the main roster. Currently, T1’s Valorant roster consists of Skadoodle, Braxton “Brax” Pierce, and Keven “AZK” Larivière with Daniel “eeiu” Vucenovic from T1 academy.

An update to my fans, and fans of @T1: As you may have noticed, I haven't been playing with the squad in competitions, and again won't be competing in this weekend's event.

Since their 2nd place finish at the T1 X NRG Showdown, T1 has begun to slowly deteriorate in performance. Since then they have finished 5th/8th, 7th/8th, and 9th/12th at recent invitationals. TSM and Sentinels have dominated the North American Valorant scene and made T1 seem like a lower-tier team in comparison.

The Pop Flash Valorant invitational was the last Riot Games sponsored event for teams to compete in. Now, teams have several weeks to move around their rosters before the next big tournament arises. 100 Thieves recently dropped almost their entire roster for Nick “Nitr0” Cannella and other teams are beginning to reevaluate roster moves.

Hearing that Ska is moving back into the starting lineup

More CS:GO professionals are beginning to make the jump to Valorant for a new competitive opportunity. Josh “steel” Nissan recently announced he would be moving to Valorant from CS:GO. Many Valorant fans have suspected a team like 100 Thieves to pick him up, but there’s now a chance that he may come to T1. For now, T1 has yet to round out the rest of their roster and are most likely looking to see which pairings gel together most.