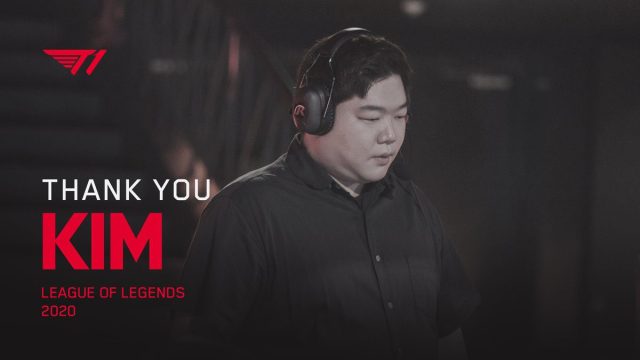 T1’s head coach Jung Su “Kim” Kim has resigned from his position following the results of the LoL Worlds Qualifiers. The coach, originally signed until 2022, stepped down after apologizing to fans that he couldn’t live up to their expectations.

Thanks for all your contributions. All the rookies in T1 have done so well this year, I'm sure that is also thanks to coach Kim's guidance. Wish him luck with future affairs.

Kim has a long history participating in the professional LoL scene. With experience in multiple regions, T1 originally welcomed him in 2019 with open arms. Unfortunately, he was unable to successfully prepare the three-time Worlds champions for the biggest event of the year. T1 thanked Kim for everything he’s done since joining the team. “We thank Kim for his commitment to the team this year and wish him the best in his future endeavors,”

On Kim’s latest Instagram post, he apologized to fans over the team’s performance and shares that he’ll see them again after the holidays.

Many T1 fans weren’t surprised to hear the news. Recently, T1 has received comments from toxic and angry fans, with some even pushing for Kim to retire. Others thank Kim for the time and effort he put into coaching the team, stating that he was a “great coach.”

As far as i can remember the last two years the lpl won worlds. And damwon plays like lpl and crushed the lck. So there seems to be a thing why this style works better then the slow lck style which i love.

As Worlds is right around the corner, there’s no other option for T1 but to keep practicing. There’s no word as to who will be their new coach just yet. There could be a possible chance that former T1 coach Kim “kkOma” Jeong-gyun may return after recently leaving LPL team Vici Gaming.

Stick with Daily Esports for more League of Legends updates and news!