Competitive Splatoon 3 is already getting off the ground 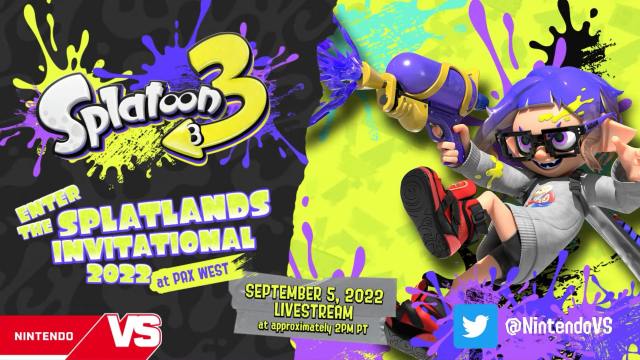 Screengrab provided by YouTube via Nintendo Multiple competitive events are coming for Splatoon 3 prior to its release date.

Nintendo announced during Wednesday’s Splatoon 3 Direct that the game will have an official tournament before its release date. The debut Enter the Splatlands Invitational 2022 will take place at PAX West in Seattle, Washington, in September.

While not an open-bracket event, this invitational tournament will still feature a number of top Splatoon players. Teams who placed well in the recent online Inkopolis Showdowns for Splatoon 2 will get to be the first players to compete in a North American tournament for the new game.

The livestream for the Enter the Splatlands Invitational is set to begin around 5 p.m. ET on Sept. 5. Viewers can expect more information to come from the Nintendo Versus Twitter account leading up to the event. Likewise, further information about Splatoon 3 in general will be available through the Splatoon North America Twitter account.

Whew! Did you catch the #Splatoon3 Direct? No need to reply if your cerebellum is still soaking in all the science. But if your alarm failed you (and our intern failed us), don't panic. You can watch the whole thing here!https://t.co/dc2G0kggxJ pic.twitter.com/qdKS0K3jTu

Splatfest ahead of Enter the Splatlands Invitational

While the Enter the Splatlands Invitational will be Splatoon 3’s first offline competitive event, prospective players can still look forward to other kinds of in-game competition. Wednesday’s Direct confirmed that Splatfests are returning to Splatoon 3.

In Splatfests, players choose a team based on a given theme, then compete in online matches to earn points for their team. Unlike the last two games, Splatoon 3 Splatfests will allow players to join one of three teams.

To that end, Splatoon 3 is introducing a new game mode called Tricolor Turf War. During the second half of Splatfests, four players from the currently-leading team will compete against two players each from the other teams. However, the leading team members will start in the middle of the map, forcing them to defend themselves against opposing players from both sides.

The Splatoon 3 World Premiere Splatfest will take place from noon to midnight ET on Aug. 27, even before the Enter the Splatlands Invitational. Players can choose to join team rock, team paper or team scissors. Then, Splatoon 3 will launch in full on Sept. 9.